Convergence: The Music of Stewart and Gershwin 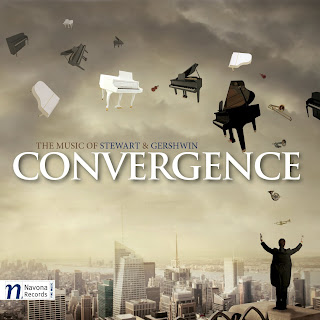 Not everything, of course, is great, is what you personally like, or even suits your mood at the time you listen. As a reviewer/"critic", I need to wait if my mood isn't right, and my personal likes have to be tempered to what I nonetheless appreciate, regardless of my ultimate desert island choices.

That is not a problem with today's album Convergence: The Music of Stewart and Gershwin (Navona 5892). Though this recording would not make my desert island list, it is thoroughly likable. My mood never nixes its sounds. It feels right listening any time.

The somewhat unexpected juxtaposition of the Tower Brass Quintet performing a suite from Porgy and Bess and two works by David Nisbet Stewart for piano and ensemble does not seem misaligned. In a concert situation, of course, such combinations are expected, welcomed. It's rare when a concert bill has a singular focus, at least in the mainstream of the "season" and its typical offerings. And the passage from the Stewart "Concerto for Piano and Orchestra," to the brass quintet's Gershwin and on to Stewart's "Suite for Piano-Brass Quintet" has a sonic flow that makes textural sense and stylistically works together.

I would not go so far as to say that there is some bonifide "convergence" happening here. Stewart's music uses the solo piano in ways that do not clash with how Gershwin did such things. Stewart's music is down-to-earth and pleasing. It's not exactly "jazzy" but it has roots in the reworking of traditional vernacular--but then not in any direct sense.

Both his works, presented well here, have a kind of backward look to them, yes to Gershwin perhaps and that era, without necessarily following dots to the reproduction of such things. Stewart's music is also in line with Ives' modernization of a concert in the park, a hymn tune, and other such things, which were not entirely archaic at the time he originally wrote the music he did, but certainly are now. Stewart does in his own way with archaic materials what 20th century American composers did sometimes. They made reference to Americana without necessarily quoting, giving a savory whiff of the forms without calling them into being, so that there is a mood more than an adaptation.

Not that Stewart's music isn't modern sounding. It is in the early modern Americana sense. And so it has charm. It also has enough depth that this is not a light classics jaunt or a spill into the "pops" idea.

And so the two Stewarts plus the one Gershwin wear well, don't seem at all dated, fit in with various moods without insistence, and provide some very worthwhile music for under an hour, whenever it strikes you to listen. That's a fine thing to my way of thinking.