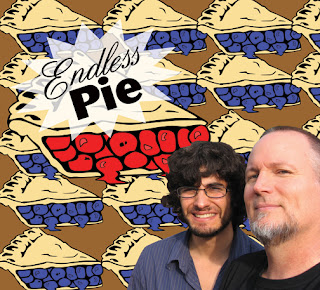 Another one today that bridges the border between avant improvisational and new music classical: the 2-CD set Endless Pie (pfMentum CD072) by Jeff Kaiser and Phil Skaller. Jeff plays trumpet and flugelhorn as well as contributes his voice and electronics; Phil Skaller is on prepared piano. The whole performance is processed through a laptop to at various times create altered sonics.

The two create a great deal of kinetic energy and a variety of sonic environments that straddle the space between the composed and the improvised, seemingly placing their performance in either and/or both camps at any point in time. The electronics and the entire sound are created live.

What is interesting about the whole affair is the sheer sensuous variety of sound universes created with these more-or-less straightforward means. Kaiser's horn work is loaded with both unconventional and conventional sound producing techniques; Phil complements, extends and resituates what Jeff is doing with a "hands-on" manipulation of the prepared keys, again both conventional and less so.

The resulting 109 minutes give the listener a common ground between improvisation and composed sounds which is neither predictable, monadic or in any way random. There is intent and gesture in every sound-sculpting episode. These are gifted creative artists producing instant sound environments that nevertheless show that a good deal of thought and forethought went into them.