Anne Vanschothorst, Then It Became Clear 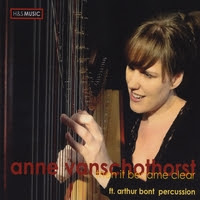 Anne Vanschothorst is a Netherlandish harpist-composer. For Then It Became Clear (self-released) she is joined by Arthur Bont (in those pieces that call for percussion accompaniment) for a most engaging recital of her minimalist compositions. Often enough the sound is almost medieval-like as much as it is minimalist, the minimalism being more Satie-esque than Philip Glass-ish.

This suits my ears very well. Ostinatos and folk-like, song-like repetition strains seem fresher to my ears than some of the more overdone minimalist tacts. She has a more lyrically dense than a rhythmically dense emphasis much of the time, which works well for the harp. The sound is intimate, something to enjoy and contemplate in solitude, without the distractions of everyday commotion and turmoil that we increasingly find ourselves faced with in this post-industrial world.

The music will fit in with whatever mood you may be in. It is a lovely break from the humdrum. Her playing is authoritative, precise and expressive.

If you love the solo harp like I do, Anne Vanschothorst's Then It Became Clear is a bit of a godsend. Music to revel in more than revel with? Yes!! Recommended.