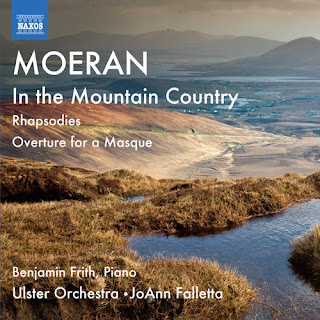 Ernest John Moeran (1894-1950) was a composer of Anglo-Irish heritage. As he grew up the Norwich and Irish folk music he heard around him impressed him greatly. After a serious head injury in the first world war left him with a lifelong disability he began collecting folk songs in the countryside and also studied with John Ireland.

All this gives us an all-too-brief but adequate backdrop for the disk of orchestral works at hand (Naxos 8.573106). JoAnn Falletta and the Ulster Orchestra contribute an interesting program of selected works, including one with a concerted piano part (a Rhapsody) played by Benjamin Frith.

There is the evocative tone poem "In the Mountain Country", three "Rhapsodies" and the "Overture for a Masque". All were written in the '20s through the '40s. Because I received this one as a download and there was a glitch in the downloading I cannot quite tell which tracks are which. So I will not be able to give blow-by-blow descriptions. As it turns out the music in a way is of a piece so it does not matter really.

This is pastoral, rhapsodic, folkish symphonic music John Ireland would have appreciated. For that matter there is a hint of the rustic folk side of Vaughan Williams to be heard at times.

Maestro Falletta, the Ulster organization and Benjamin Frith all give this music the life and breath it needs. The end result is some extraordinarily soothing sounds that have some grit. It's music that has an Anglo-Irish impressionist tinge to it.

There's much to please the Anglo-Irish-phile here.