Mohammed Fairouz, Symphony No. 4 "In the Shadow of No Towers"; Philip Glass, Concerto Fantasy for Two Timpani and Orchestra 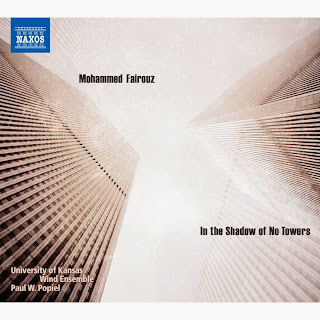 Mohammed Fairouz (b 1985) seems to be one of those young composers who is making an impact and is destined to continue doing so. I was taken with his album Critical Models, Chamber Works which I posted about this past October 8, 2013. Now I am glad to get the chance to listen closely to his Symphony No. 4, "In the Shadow of No Towers" (2012) (Naxos 8.573205) which is coupled with Philip Glass's Concerto Fantasy for Two Timpanists and Orchestra (2000/2004).

The two works are scored for wind ensemble, and played nicely by the University of Kansas Wind Ensemble under Paul W. Popiel.

Fairouz got the inspiration for this work by the cartoon vignette by the same name created by Art Spiegelman. The symphony's program follows movement-by-movement the gist of the cartoon. So then movement one, "The New Normal", depicts a family in the typical everyday setting, asleep in front of the TV with the calendar on the wall reading September 10th, then the same family by the TV the night of the 9-11 disaster, horrified. On the succeeding night the calender on the wall has been replaced by an American Flag. The second movement depicts a typical American, woken out of his complacent, narcissistic world. The third movement is all about Republican versus Democratic reactions to the horror and has a kind of collage of patriotic marches and other literal motifs to represent jingoism and anger, respectively. The final movement is underlined by the aural representation of a ticking clock (a time bomb) and a mournful dirge-like theme, representing "anniversaries" of the event, when life goes on, but, as the music suggests, in a world literally shaken to its core.

The music is as evocative as it is provocative, with as literal a program as you are inclined to get nowadays. The music is a message bearer. There is no clear lesson, no clear resolution to be permanently chiseled on the monuments. "Never forget" was one that has been tried, borrowed from the holocaust, but it hasn't really stuck. We've presumably caught the instigators of the horror, given them just punishments, so we should have closure. Yet the anniversaries are a reminder that "normalcy" may not quite have reached us. There is an inner turbulence inside many of us still, a feeling that the classically full story may not be ours in the near future, that we will never really resolve it all in our heads. This was not war, so in a way it can never really end. We can only deem it closed by an act of will, of a resolve to carry on, to tie up loose ends ourselves.

The music has in common a tonal expressiveness and a kind of post-minimal outlook shared by the Philip Glass work. The Concerto Fantasy in the wind band arrangement performed here has a seriousness in common with the Fairouz opus, but the music has no concrete program. It is sparked by some excellent writing for the two timpanists, ably performed by Ji Hye Jung and Gwendolyn Burgett. The work is especially notable for the infectious 3+3+2 and the 7/8 tuttis. This is Glass beyond the Einstein phase, still kinetically charged but not as concerned with repetition.

I was captivated by both pieces and the performances. The final movements of both works have staying power for me. And that is not to denigrate the other movements but rather to recognize how each work has a sort of teleological funnel effect, each inexorably moving forward to its end, though in very different ways.

This is music very much of the present. And it is very good at that. It is music that looks forward to the "next". For all that it is a disk that should be heard by those who live in the world of today. Nostalgia may be dead, the music seems to say. We live in the future again, now. Perhaps permanently.

Posted by Grego Applegate Edwards at 6:39 AM