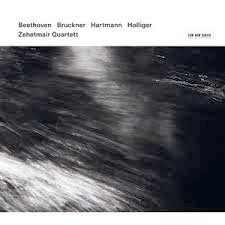 I've been re-reading a volume of selected letters by the 20th century composer Paul Hindemith. One that's stuck in my mind this time around was to his publisher. In response to the suggestion that such-and-such a chamber group perform one of his works he commented that he didn't think they were stylistically suited--they played everything like it were Richard Strauss, too "ponderous", too "expressive", too heavy with vibrato. It struck me that Hindemith would have liked the Zehetmair Quartett, who are more modern in their readings of the quartet literature, emphatic without being monstrously so.

I've been listening to their new 2-CD set that features quartets by Beethoven, Bruckner, Hartmann and Holliger (ECM New Series 2195/96 4763942). It makes for a most unusual program in that it covers Beethoven's last quartet, the op. 135, and one of Bruckner's early works, the String Quartet WAB111. The second disk ventures into modern territory with Karl Amadeus Hartmann's String Quartet No. 2 and a nice surprise, Heinz Holliger's String Quartet No. 2.

This is an excellent group. They give Beethoven's last quartet a very near definitive reading, so much so that I listen and no longer feel that there is any "difficulty" grasping it. They lay it out with such musical logic that it all seems totally comprehensible. (And after so many years listening, I suppose I have also adjusted to the work in terms of itself and what came after in chamber music. But this performance makes all that even more clear to me.)

The Bruckner does not sound at all naive and unformed in Zehetmair's hands, but a bit Schubertian. Certainly this gets a definitive performance here.

The Hartmann and Holliger works follow a progression from the early modern to the very modern. It is not a mistake that Holliger dedicates his quartet to Elliott Carter. It is filled with modern complexities, dissonances and intricate structural permutations. Not having heard the compositions of the world-famous oboe master and now conductor, I must say that I am mightily impressed with this work. But that is not to slight Hartmann, whose quartet has real substance.

So in all and in every way I would call this Zehetmair Quartet set a triumph. The fine attention to detail, the brilliant sound staging of the audio, the dedicated and glowing readings, the unique program--all make for a landmark recording.