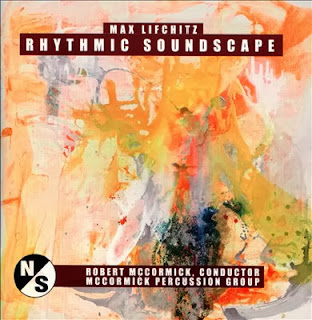 First, a disclosure, I was a student of Max Lifchitz back when he was teaching at the free-form School of Contemporary Music in the Boston area, while he was getting his doctorate at Harvard, in 1972-3. I doubt he'd remember me but he was an impressive teacher with a lively musical mind. Since then he of course has gone on to have a distinguished career as composer, teacher, pianist and director of the North/South Consonance and their musical endeavors.

Today we have a recording of his music for percussion, Rhythmic Soundscape (North/South 1059). On it we are treated to six works for percussion in various configurations, written over the period 1977-2005. The McCormick Percussion Group under director Robert McCormick do a fine job with the music.

Maestro Lifchitz's 1977 "Music for Percussion" has some of the more abstract rhythmic structures of all the works. It is advanced in a manner that fits in with the percussion ensemble music of that era, yet bears the stamp and the logical flow of Max Lifchitz the composer.

At the other extreme is the recent "Dos Danzas" (2005), which as the title suggests takes on dance forms in a lively manner.

Between those two poles we have a variety of pieces that stay in the mind in memorable ways. One of the highlights is the concerto-like "Rhythmic Soundscape No. 5", with Max at the piano in fluent dialogue with a percussion quintet. The demanding and rewarding work for solo percussionist, "Inner Pulse" (1983), is a piece of challenge, virtuosity and cohesiveness, performed impressively by Beran Harp.

In the end we get a personally idiomatic program of works that give us a side of Lifchitz that is rhythmically involved, complex or more direct as the composer sees fit, and extraordinarily well-wrought. The earlier works sometimes show the elated, pioneering elegance of some of the works of early-mid last century. The music goes beyond that in later works to establish a melodic percussion language more Lifchitzian. It's not just percussion music, it's Max Lifchitz percussion music and as such is an impressive addition to his recorded output. The performances are stirringly right. Bravo!

Posted by Grego Applegate Edwards at 6:33 AM