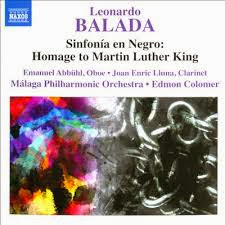 Modern composers should not be ignored just because their music has not entered the standard repertoire. How many living composers do have works in that category? It would seem very few. There are those composers and works who deserve recognition in this way, and frankly a few that might not. Time tells a tale of course different often enough than any previous present. There was an era when Meyerbeer for example was in, years ago, and yet he is not well known today. I don't want to comment on the merits or demerits of Meyerbeer at this point, but it illustrates how things can change.

Spanish born composer Leonardo Balada (b 1933) exemplifies the present scene in that way. He is not enshrined to my knowledge with a permanent station in the orchestral repertoire, yet he is has been writing excellent orchestral music for many years.

Possible works for posterity? The Malaga Philharmonic under Edmon Colomer has put together a disk with three good examples of Leonardo Balada's orchestral music, titled after the lead work, Sinfonia en Negro: Hommage to Martin Luther King (Naxos 8.573047). This work is subtitled "Symphony No. 1". It was completed in 1968 and of course is timely for the upcoming Martin Luther King Day commemoration. It has a modern demeanor typical of Balada's music in that era, has good pacing and divides into four movements: "Oppression", "Chains", "Vision" and "Triumph". The music reflects those four situations with passages appropriate to the connotations--from some bleak sounding, expressive orchestral utterances to those of confirmation. It is a moving work that will win a good many modern-oriented admirers with this version I do believe.

From there the orchestra goes to a previously unrecorded work from his later period, the neo-classical sounding "Double Concerto for Oboe, Clarinet and Orchestra" (2010), a work of contrast to what began the program, notable for its vibrant solo parts, well played by Emanuel Abbuhl (oboe) and Joan Enric Lluna (clarinet) and the almost playful orchestral response.

The final work, "Columbus: Images for Orchestra" (1991) is an arrangement from his opera Christopher Columbus, and has more of a Spanish-Latin American feel to it than the preceding works, understandably. It is a real showpiece for orchestra, a good example of Balada's orchestrational and thematic command over his material in combining sometimes folk-like themes, colors and modernistic touches with very engaging infectious music that contrasts with more somber introspective passages.

In the end we have three very different works that give us a broad picture of Leonardo Balada the composer, a master in his own right. These are fine performances and the disk is much recommended as a vehicle to introduce you to his music or a reaffirmation if you know his work already. The end pieces express something that could well be a part of concerts for MLK and Columbus Day commemorative concerts in future. Who can say? The disk holds its own in making a substantive case for the merits of Balada and the need for wider recognition.