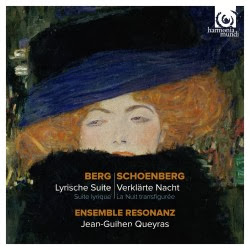 It is an occasion of some potential importance when two modernist classics are programmed onto one CD. And when Ensemble Resonanz performes both works in the versions for string orchestra with the excellent Jean-Guihen Queyras as cellist and artistic director, it's also something to notice. That's who we have on the disk, doing Berg's, Lyrische Suite and Schoenberg's Verklärte Nacht (Harmonia Mundi 902150).

They go together well. Of course Arnold Schoenberg was the spiritual and factual leader of the Viennese School of modernists, Alban Berg a primary follower along with Anton Webern. The two works were key in their respective careers (Schoenberg and Berg, that is). Verklärte Nacht was Schoenberg's farewell to Late Romanticism and so also one of its greatest expressions; the Lyric Suite was a milestone in expressive modernism, really rather Romantic (which Berg never quite left behind), but also an iconic embodiment of Schoenberg's 12-tone compositional ethos, technically following the mandate (most of the time) but doing it in a way wholly Bergian.

Both Schoenberg's 1899 opus and Berg's work from 1925 have related programmatic content. "Transfigured Night" had its impetus from Richard Dehmel's poem about an illegitimate child and its societal redemption. The "Lyric Suite" was apparently inspired by Berg's love of Hanna Fuchs, who was married to another.

The respective inspirations led to some mightily empassioned music. Hearing both works in the string orchestra version in this way heightens the expressiveness of each work and, at least to me, allows us to see the similarities. Highly chromatic, highly dramatic, these were works that created beautiful extra-tonal landscapes that shared in common a brilliance of inspiration.

Queyras and Ensemble Resonanz give us soaring renditions of both works. If the "Lyric Suite" seems in the string orchestra version virtually new, it is no doubt my reaction after a near lifetime of appreciating the quartet version. It may take a little more careful listening for the balance of thematic materials to re-emerge (if you like me are used to the quartet reading), but it may give us a different set of insights and appreciate the expressive angst of the work all the more. I feel that way, at least.

These are marvelous versions of two milestone works. The disk belongs in your library if you follow the roots of where we are today. They are a joy to hear in their own right.