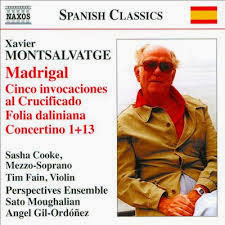 What I do not know about Catalan-Spanish composer Xavier Montsalvatge (1912-2002) could fill many books I am afraid. Aside from some short works I have on vinyl anthologies and a CD I reviewed here last year, he is new territory for me. But as always my ears step in and hear what they need to for me to proceed.

There's a new anthology of some of his bright lights that I've been appreciating. It's identified title-wise by three principal works included on the CD. Madrigal (Naxos 8.573101) takes us on a ride through five pieces and the years 1969-1995. The Perspectives Ensemble under conductor Angel Gil-Ordonez brings us lovely performances that exemplify Montsalvatge in various stylistic guises, who like Stravinsky went through a number of transformations while still remaining recognizably himself.

There is the neo-classic incarnation in works like "Folia daliniana" (1995), the serialist of "Cinco invocaciones al Crucificado" (1969), and early modern influences of such artists as Satie. Sasha Cooke, mezzo-soprano, does a fine job with the "Madrigal" (1991) and the "Cinco invocaciones". Tim Fain comes across well as the violin soloist on "Concertino 1 + 13" (1975), and Sato Moughalian's flute sounds excellent on the "Serenata a Lydia de Cadaques" (1970) along with the piano of Blair McMillen. There are other soloists peppered throughout the program and they all come across with a lyric panache.

Five listens to this disk and I feel I have experienced something of the essence of Montsalvatge. This is wonderfully performed music and clearly there is much to be gained in pleasure and enlightenment in partaking of the program's many high points. I don't think you'll find a better introduction to the composer, certainly not at the Naxos price. It whets my appetite for more, but it also fills the bill for those who know Montsalvatge but do not have many or most of these works. Brilliant!