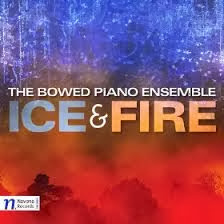 Ever since Henry Cowell called for passages strumming and plucking inside a grand piano, the sound has been with us. Some jazzmen have featured it since the early '60s, notably Burton Greene and at times Keith Jarrett, among others. But to put together an entire ensemble of players working inside a piano has to my knowledge never been approached systematically until the recent appearance of the Bowed Piano Ensemble, founded by composer Stephen Scott. Up to ten musicians go to it on their new CD, Ice & Fire (Navona 5937).

There are five compositions by Scott and one rather glorious arrangement of Miles Davis's (actually Joe Zawinul's) "In A Silent Way" for vocalise (soprano Victoria Hansen) and the ensemble. Ms. Hansen rejoins the group on the Spanish-tinged song "La Guitarra". Besides those there are varied works that bring out the incredible sound of the piano strings bowed, plucked and otherwise set in motion for a highly engaging near-orchestral presence. There are works that almost sound Asian ("Afternoon of a Fire"), minimalistic ("New York Drones"), spatially atmospheric ("Aurora Ficta"), and places somewhere in-between ("Baltic Sketches").

After hearing this disk a number of times I must say I've never heard anything like it. It is a rather incredible sound, highly appealing, and both the compositions and their execution open up in a wonderful way a new universe of music.

If you have a sense of musical adventure or like the idea of the very new this will no doubt floor you. It floored me! Thank you Stephen Scott!