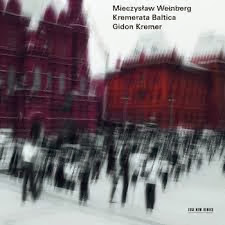 There seems little doubt about it, composer Mieczylaw Weinberg now has gotten the recognition that mostly eluded him during his lifetime (1919-1996). Though he was at times in fear for his life, fled his Nazi-occupied homeland when young and spent the rest of his life composing in the USSR, where his status as Jew and modernist sometimes ran him afoul with the Stalin regime, he continued undaunted, amassing an amazing output of works--22 symphonies alone.

And in his later years after Stalin's death he was given more freedom to compose without fear. Towards the end of it the recognition began gaining momentum. By now his music is being performed all over the world. Recordings are being made frequently. He is hailed as a 20th century marvel (which he is).

If there were any lingering doubts beforehand the new two-CD disk of his music by Gidon Kremer and Kremerata Baltica (ECM New Series 2368/69 4810669) should disperse them once and for all.

For here we have one of the major figures in Eastern European modernism (Kremer) and his celebrated organization in a sort of mini-retrospective of Weinberg chamber and orchestral works, a few selective milestones, available here in the States shortly, backed up with a US tour that begins at the end of the month.

First, the set. I must say they have chosen well and given Weinberg some wonderful readings. The first disk is devoted to chamber works. Weinberg's "Sonata No. 3", op. 126 for unaccompanied violin has Kremer himself doing the honors and it is an intricate, advanced and moving work indeed. This is followed by no less entrancing music, the "String Trio", op. 48 and the "Sonatina" for violin and piano, op. 46. All are given their due in detailed and masterful, virtuoso interpretations.

The second disk concentrates on music for orchestral forces, specifically the "Concertino", op. 42 and Weinberg's 10th Symphony. Both are major works and give ample evidence that Weinberg was no doubt the equal of Shostakovich and Prokofiev, and at times may show their influence, but all-in-all Weinberg was after his own muse in the way he combined his Jewish heritage in a sort of folk quality with his own manner in the interweaving of classical Eastern tradition and modernism.

The staying power of his melodic invention and structural innovation can be heard everywhere in this program. And every work shows its own compositional brilliance. Weinberg deserves the recognition now coming to him. He belongs on the short list of Eastern European masters of the last century. This set belongs up there with the very best recordings of his music.

Kremer and the Kremerata Baltica will be celebrating the release with an extended US tour in the days to come. January 30th finds them at the 92Y Kaufmann Concert Hall, New York; February 2nd the Davies Symphony Hall in San Francisco; February 4th at Stude Concert Hall, Houston; February 6th at Hill Auditorium, Ann Arbor; February 7th at the Harris Theater in Chicago; and February 8th at Ordway Center for the Performing Arts, St. Paul. In each of these concerts they will play one or two Weinberg works as recorded in the album.

Weinberg has arrived at last.