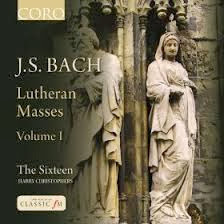 When life does not go well for me I sometimes stop and reflect. Well, even if it does go well. Yesterday was a case in point. I was thinking about Johann Sebastian Bach, his brilliance (as well as John Coltrane in that light). If you were to reduce it to numbers, what would the odds be that humanity would produce such a masterful musician, allow him to produce his music over a long time, and then ultimately recognize him in the years that followed? The answer is probably alarmingly small. How many Bachs have there been that were diverted from their path, or that we know nothing about for the accidents of chance or circumstance? Small perhaps, but a larger number if you were able to do a head count, alas.

So it is with some gratefulness that I turn to the music today, J. S. Bach's Lutheran Masses, Volume 1 (Coro 16115) as performed by The Sixteen under Harry Christophers. There are three reasons why this volume is exceptional.

The first is the manner of performance. Specifically Christophers does away with the potentially large choir that would perform these works, and instead assigns two singers per part for a total of eight. This in tandem with the chamber orchestra assembled for the performances gives you an exceptionally intimate, exposed version of each line written, allows you to follow the intricate and of course unprecedented beauty of the countrapuntal lines, the subjects and their entrances, counter-entrances, etc.

The second great idea embodied here is to program the "Mass in G minor, BMV 235" and the "Mass in F Major, BMV 233" with the Cantata 102 "Herr, deine Augen sehen nach dem Glauben!" BMV 102. This is a wise and fascinating choice because Bach in the two masses in essence plagiarizes himself. He borrows thematic material from the cantata and reworks it in the masses.

The third reason is perhaps the more obvious, but central to those who wish to be moved and enlightened. That is that the works are not as well known as Bach's Latin "Mass in B minor" yet are nonetheless filled with Bach's brilliance. The fine performances with reduced choir bring out that brilliance with that much more clarity.

In short this is an excellent program in performances that one should not miss.