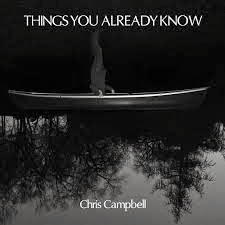 For music you don't expect, when you don't expect it, Chris Campbell can give it to you. And he does. Today I'm digging into his third album for Innova (860), Things You Already Know. I've review favorably the other two on the blogs. The third confirms what I already knew--that you have to chuck out the categories in his music, or create a new one with lots of hyphens.

Call it progressive-classical-postminimal-rock-psychedelic-radical tonality? OK, that might cover it. What we get is a 33 minute quasi-suite of seven parts on vinyl or CD.

The instrumentation includes strings, fuzz guitars, some kinds of junk percussion, and more. It has some of the repetition of progressive rock but structured and conflated with some drones, collaged combinations out of different sounds and styles, and a sure sense that this Maestro Chris Campbell knows where he is taking you. Things build up, then collapse into the next pathway to the next station, that in turn builds up and on from there.

It has the feel of what we (who were around for it) heard in the more extreme psychedelics of the Beatles and other early prog experiments. Only there is more of it and the "it" has the unmistakable stance of a composer of talent. Nothing is quite random yet it feels much like open form when you are inside various parts.

Make no mistake. This is new music. It is not old music. It captures the mysterious resonances of earlier rock at its most experimental and makes something complex and structured, bold and intrepid in where it goes and the lovely results it insists on providing your listening mind.

Lyrical and cosmic--a combination that really appeals when it's done as well as Chris Campbell does it here. Get this one only if you want an adventure. But then latch on to your anchor or ballast! Excellent.