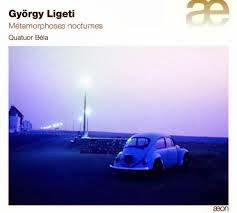 The importance of Gyorgy Ligeti looms ever larger in my mind as one of the heroic champions of later High Modernism. He was a composer with a keen dramatic sense and no matter what he set himself to do, he managed to triumph.

The Quatuor Bela has given us a volume of prime Ligeti in their Metamorphoses nocturnes (Aeon 1332). I've been listening closely. It's a program of Ligeti's String Quartets: No. 1 (1953-43) and No. 2 (1968), and then his "Sonata for Cello" (1948-1953). All the works have been recorded before, naturally. I reviewed the Keller Quartett versions of the quartets here last August 26. I found their versions bracing, but then I find the Quatuor Bela versions no less so.

These are high watermarks in the quartet repertoire, following upon Bartok's masterful six and prefiguring those of Elliott Carter. The subtitle of the first quartet is "Metamorphosis nocturnes", which explains the title of the program but also rather puts Ligeti's chamber work here in perspective. I am not the one, especially in this setting, to give you a thematic analysis of what happens with the melodic-harmonic materials in these pieces, but transformation is virtually continuous. High Modern music often can be thought of as variations on variations, but true also would be the idea of transformations of transformations, with the right composer. Ligeti is a primary example.

Both quartets have moments of raging fury, of temporal explosions, of dynamic diremptions followed by quieter reflections or sensory-motor energy modules. And yet with enough listens you feel that there is a kind of inevitability of the movements from x to y and that is certainly part of the brilliance of these works. Quatuor Bela tackle it all with a kind of all-around sequencing that makes a convincing whole out of the parts.

A most definite bonus on the disc is the two-movement Sonata for Cello (1948-1953) taken in a definitive way by Luc Dedreuil of the quartet. There are more conventionally concerted moments, albeit in High Modern garb, than you hear in the quartets. And yet the expressive fire and logic of sequence comes through here as well.

Needless to say these three works are a critical part of the 20th century chamber music heritage. It is nice to have such stirring performances on one program. Bravo!