Michael Byron, Music of Nights Without Moon or Pearl 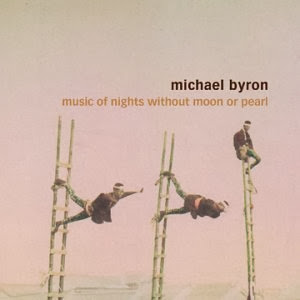 There is music that tries to include everything. There is music that through a kind of mental erasure, eliminates things, like a stone block is chiseled away to reveal an image somehow already there inside, or like a completed drawing that is then subjected to selective erasing to create new form.

Michael Byron, composer of radical tonal music which is not minimalist because the repetition is not the point, writes subtractive music in a way. It is music that creates melody by the intersection of the parts, by making the background come to the front, by creating something not reducible to someone writing melody and harmony on a piano and then taking pieces of that result and assigning them to instruments. Or if he does compose at the keyboard (I have no idea) it is in the realization of the parts that the music comes about, that it sounds, not as much before.

That's how I am thinking of his music as I listen to the three chamber work collection Music of Nights Without Moon or Pearl (Cold Blue 0002).

The first two works interrelate and most closely adhere to the idea of foreground-subtraction as I impressionistically experience it. They do so by virtue of being performed by a mid-sized chamber group, the Calarts New Chamber Players, consisting of two violins, viola, cello, contrabass, two pianos and synthesizer, all conducted by David Rosenboom.

The title piece works in blocks of sound--the pizzicato strings working on harmonically related tonal-melody fragments with a loose pulsation. The synthesizer comes in at angular intervals with a block chord related to the harmony of the strings. The periodicity of its continual sounding and resting has a pulsation that is not in the same ratio as the strings. Finally the two pianos enter with a strummed chord that is rhythmically closer to the pulse of the strings, and as the piece progresses becomes increasingly frequent. In the on-the-surface structurally simple three-section articulations the end effect is of a continually percolating tonality fascinating to hear, with the listening ear taking it all in and at the same time hearing melody come forward as we hold our attention to one or more voices at any point. Finally the piano strums become ever more insistent, then all but disappear to return more quietly as the ear focuses more on strings and synth in the end.

The related work that follows, "Invisible 'Seeds' for James Tenney", has a sectional approach as well. The strings play a sustained arco of tonal-related elements in a progression that contains latent melody in its movement. The pianos punctuate throughout with staccato chords in a somewhat random, irregular pattern that nonetheless works as contrast to the sustained strings. It is in a way a slow movement in contrast to the end-pieces.

The two quite sustained, semi-pastoral mood works set the listener up for a considerably less locked-in chromatic-diatonicism in the final piece. "Entrances" features David Rosenboom on overdubbed multiple (4) pianos working to create an all-over, harmonically complex turbulence that at first almost sounds like something Cecil Taylor would be after in some of his mid-to-later solo works for piano. Yet in the end the music evolves so that motival kernels work off of each other to create a more collaged sweep that increasingly emphasizes more-and-more certain motives. It is a literal phantasmagoria of swirling sound.

Perhaps the idea of a subtractive method is not complete without the additive opposite. After all Maestro Byron is in each case combining x, y and z together in interactions over time. But then it's the effect of the listener mentally creating melody out of the fragments in place of the typical through-composed work that more or less hands it to the listener ready made, that's where you can think of it subtractively. No matter. The melody could also be thought of as cubistic--refracted and broken into different bits as a cubist artist might handle an image.

The point is that the disk gives us three fascinating aural montages that please without managing to fit into any of the pre-ordained structures of pre-modernism, modernism or minimalism. And of course what matters is that all three resulting works are rewarding and fascinating to hear.