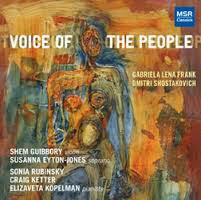 When you encounter a CD release that makes you pause, that grows majestically before your ears the more you listen, you go away from it glad to have had the chance to open up alongside the music's flowering, and look forward to hearing it many times again.

Today's album has that quality in abundance. It has been out for several years but has lost none of the sheen of the new and notable. I refer to a three-work disk, The Voice of the People (MSR Classics 1344). It features the work of two composers from widely disparate backgrounds, yet when performed together in one program, come together to create a satisfying wholeness.

Gabriela Lena Frank is represented by two works. She encompasses multiple-heritages which she brings out in her music; she was born in Berkeley, California; her mother is of Peruvian-Chinese descent; her father of Lithuanian-Jewish heritage.

"Suenos de Chambri: Snapshots for an Andean Album" (2002) joins the stunning artistry of violinist Shem Guibbory with the considerable interpretive talents of pianist Sonia Rubinsky. The music is based on photographs of a vanishing traditional Peru by Martin Chambi. It occupies a space influenced understandably by Peruvian folk-vernacular, expressively melodic, filled with personally characteristic touches and dramatic flourishes. The work is both modern and timeless, the latter in its backward glance at musical roots; the former in its transformation to very idiomatic Frank.

Dmitri Shostakovich's later masterpiece, the "Sonata for Violin and Piano, op. 134" (1968), gets a extraordinarily focused and intensive interpretation by Shem Guibbory and Elizaveta Kopelman. This is music of the kind of sublimity that is in every sense the product of a master after long years successfully finding a voice, reaching a titan-height peak and achieving considerably inimitable profundity, communing directly with his muse with nothing standing in the way.

The album is a triumph surely for Shem Guibbory, whose performances glow magnificently, for Susanna Eyton-Jones, who combines drama with a very nuanced delivery, and for the three pianists, who each in his own way achieves artistic completeness.

Finally this is Gabriela Lena Frank and Dmitri Shostakovich performed with deeply committed artistry. I don't believe I've ever heard a more intensely realized op. 134. And Ms. Frank comes through with clarity and brilliance.