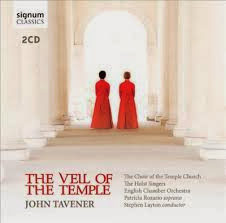 The present-day John Tavener passed away last November, but not before leaving behind a body of significant works, in later years taking on a mystical, religious tenor when he converted to Catholicism and then joined the Christian Orthodox Church.

He was at best known originally for being the first (and only?) modern classical composer to sign with the Beatles' Apple Records, recording the well-received work for voices and orchestra, The Whale.

He gradually turned away from modernism to embrace a mostly tonal yet innovative stance in the post- realm.

The Veil of the Temple (Signum Classics 367 2-CDs) is certainly his most ambitious, in its original version to be performed all night into the morning hours at the Temple Church (built 1185-1240) in London, a replica of the church built in Jerusalem.

The performance heard on the CD was recorded at the Temple in a concert version lasting several hours. The score calls for the massed Choir of the Temple Church and the Holst Singers, the church organ, soloist soprano Patricia Rozario, and the English Chamber Orchestra, all under the direction of Richard Layton.

Towards the end of his life Tavener came to believe that all organized religion had a similar mission and objective, though he remained with the Orthodox Church. This work was meant in part as a bridge from Christianity to Islam and the principal organized world religions. It includes liturgical elements of Christianity as well as those of other faiths.

Musically it combines chant structures influenced by Orthodox versions, early Roman elements as well as Vedic and other forms. In the end it is a complicated series of solo chant, unison chant, orthodox forms, polyphony and chordal harmonies in addition to special sonic events achieved by voices and instruments.

It is in all one very involved ritual experience that the liner notes explain in depth. Even in the condensed version there are a great deal of contrasting uses of aural space that at one and the same time are both archaic and neo-modern. If you know John Tavener's later work it fits in with what he was doing at the foundations, but is much more involved in the articulation of its many parts.

The performances are heart-felt and inspired. You can't help feeling that this is the work John Tavener wanted to leave as his last testament, his final musical utterance, though there are several works that followed this? Either way it is a stunning achievement that opens up a firmament of sound for us to contemplate.