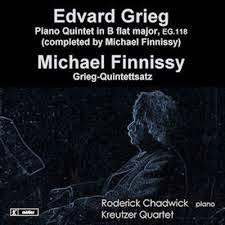 Some recordings are so unusual they almost defy ordinary description. And perhaps that's also because on another dreary snowy morning my concentration is flagging. I will begin afresh.

Michael Finnissy has done something I cannot recall having been attempted before. Edvard Grieg (1843-1907) completed around 250 bars of a Piano Quintet in B flat major in 1892. For some reason that was as far as he got. Finnissy fell into the mood and structure of those existent beginnings and did two things with them. 1. He completed the Quintet along lines that Grieg might have taken, and 2. He took the 250 bars and wrote another work "Grieg-Quintettsatz" which did not attempt to stay within Grieg's world, but rather captured Finnissy's reaction to it. Both pieces have been recorded by Roderick Chadwick, piano, and the Kreutzer Quartet. The results are out on CD (Metier msv28541).

First off I should say that those first 250 bars make for a very densely romantic work that reminds one little of Peer Gynt or the Piano Miniatures, which is what Grieg to my mind is most best at. Here he tries to fit himself into a Schumann-Brahms mould, and one with not very much airspace to breath in at that, to mix metaphors.

Still, once you get used to the premises of the Finnissy reconstruction it is an impressive effort, rather remarkable in the way a composer of today can transport himself into a musical world so long past. And for that it is surely worthwhile hearing, even enjoying if you are attracted to that period.

Ultimately it is the second, more Finnissian "Grieg-Quintettsatz" that makes a stronger impression, for he begins in a Griegian mode and gradually strays into less typical style, ultimately ending in a modern-postmodern vein that is increasingly of our time.

I don't think the Quintettsatz would be as impactful without the initial Grieg reconstruction. Taken as a whole it is a journey that one rides along with and starts feeling a sense of relief once the curtains are pulled, the windows opened to let air into the stuffy Victorian parlor. In this way the process makes a total sort of musical sense.

Chadwick and the Kreutzer Quintet do a fine job with the performances. Finnissy creates music that sticks with you, creates a sort of time travel that shows ingenuity, even brilliance. Is it "legit" to be doing this sort of thing? Of course. Why not? An impressive effort!