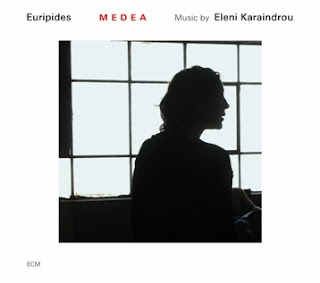 Anyone familiar with the development of modern music from the '70s on knows something of the arrival of the "ECM Sound", that is of the development of a kind of jazz that had special melodic and spatial qualities that Manfred Eicher and his artists created gradually but definitively. As time went on ECM got involved in classical music as well, at first through the more classical endeavors of its jazz artists, notably Keith Jarrett and Terje Rypdal among others, then with classical music per se, ancient and modern.

It wasn't long before ECM had a stable of classical composers that were strongly associated with the label and epitomized what an "ECM sound" could be in the concert zone. Steve Reich comes to mind, of course, who was with the label during a seminal period of his development. And then there is Greek composer Eleni Karaindrou, who continues the ECM association with her latest, Medea (ECM B0019877-02).

This is music created for the Medea production put on by stage director Antonis Antypas, as performed at the Ancient Theatre of Epidaurus. The Medea enacted there is Giorgos Cheimonas' adaptation from the original Euripides version of the play.

Musically it has a timeless, exotic quality. Eleni Karaindrou utilizes a 15-member chorus; Eleni herself effectively contributes a solo part. Plus there is an 8-member chamber group with strong Greek and Eastern Mediterranean associations. The ensemble consists of three clarinets, ney, a player of the Constantinople lute (sounding much like an oud) and lyra, then cello, the santour, and the bendir.

With these means Ms. Karaindrou creates a music of great evocative beauty, with its ancient scales and traditional instruments providing sound color and spatial punctuation, the vocals from chorus and soloists extending the sound and all-in-all creating a through-composed modern ambient pomo sort of work that is very identifiably Karaindrou-esque. Even in the purely instrumental passages the reflective, haunting melodiousness of Karaindrou comes through. It sounds less like "authentic" ancient Greek-Eastern Mediterranean music as the idea of that as filtered by an "authentic" Eleni Karaindrou sensibility. And it is one of her very strongest works at that.

The performances are excellent, the sound all you'd expect from ECM. It is music that doesn't quite categorize easily, as is nearly always the case with Eleni's works. This is her music and it belongs in the ECM orbit for the stunning sonic qualities and melodic unforgettableness that are nearly always the case where she is concerned.

Bravo! Put yourself inside the new--inside the ancient. Hear this one, definitely. Repeatedly.