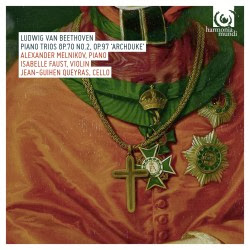 If you've lived long enough and listened long enough, music becomes filled with time and memory. There are two ways that can be the case. One is music that was in no way exceptional but brings to you in later hearing or in musical imagination the period of time as you experienced it. The second way is if the music is exceptional in itself, yet still has strong associations in time-memory for you.

To me the wonderful piano trios by Beethoven have ramifications of the latter sort. It was the early seventies, I was trying to play jazz but also had ambitions to be a composer of some sort--both were of equal importance so I had a practice, work and play routine that reflected all of it. And then, of course, I listened closely to various music. It was the days of the 3-record Vox Boxes, where you could expose yourself to all manner of chamber music in respectable performances, 3 records for $5.99. Now keep in mind the rent for my one-bedroom in Boston was $125 a month. So it was cheap only in a relative sense.

I found the Beethoven piano trios, complete in two Vox-Box volumes. I listened and was taken by the intricate three-way interplay and the wonderful lyric qualities that Beethoven was all about in many of these works. I had a girlfriend who was going to art school. We were on a kind of trial run in our relationship as was so often the case back then. She was over at my place and I was playing her some of the most lyric of the trios, gushing on about how great they were when all of a sudden, she gives me a look. I mean a look. It was sad and determined and puzzling all at the same time. What I found out later, thinking about it, was it meant "this guy is so crazy about this Beethoven that I couldn't imagine spending my life with him." Circumstances made that plain later and we parted. So the beautiful Beethoven trios call up this period to me, of loneliness, struggle to survive, and ill-fated relationships.

The music is so good, though, that the transcendence to a place outside of time is easily made. Especially if the performances are phenomenal. Looking back, those Vox Boxes had very decent performances and blend was the primary way of proceeding; none of the three stepped out with some kind of individuality.

The press materials remind me (us) that Beethoven's trios gave the violin and cello equal parity with the piano and Ludwig was the first to do so. Yes, that's in part what makes them so utterly fascinating to hear. And in the hands of three Harmonia Mundi star soloists as we have on this recording, that becomes increasingly important. Isabelle Faust is on violin, Alexander Melnikov on piano and Jean-Guihen Queyras on cello. Melnikov plays a period piano, which gives the three-way interplay even more of an equality--as the composer meant for it to sound.

Put all those factors together and set the players loose on these two very moving trios and you have something. With Faust, Melnikov and Queyras you have blending when it calls for it, but when somebody takes a lead or all three parts go in different directions contrapuntally, you have a marvelously stylized foregrounding effect. Certainly this isn't the first trio to have three heavyweights in it, but they are of our time also so the way they distinguish themselves is not by a sort of Gypsy pathos-bathos, the exaggerated gestures of neurotics, like some of the residual over-romanticists might have given out with last century. That has its place--but it is in the past, really. The post-Beethoven, pre-present. We get it. We don't need to be "harangued" by it. And in the present recording we are not.

It's not a cold-fish interpretation, mind you. It has plenty of warmth. Just rightly sufficient, not exaggerated so that you lose the structural togetherness of the passages.

Well, that is enough to give you an idea. Two of Beethoven's very best trios, showing phenomenal lyricism and ingenious part writing. Now I wont suggest you try this one on your potential partner as a litmus test, because you too might get one of those "weird looks" and find yourself very, very single! Or maybe this will cement the deal, so to say. Either way, don't blame the music, which is superlative, or the performances, which are phenomenal!