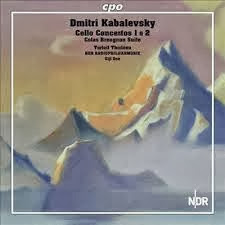 Dmitri Kabalevsky (1904-1987), the forgotten man? Not precisely. During his lifetime he was a principal force in Russian music, did not manage to run afoul of things politically, and had a good deal of attention and performances showered upon him, relatively speaking. In the West he was certainly less known than some of his compatriots. I have no idea how his reputation fares in Russia today, but over here in New Jersey, where it is currently 7 degrees outside, if you were to find a man in the street and could slow him down long enough, he might tell you that he'd heard of Prokofiev or Stravinsky, but Kabalevsky? No.

He was not the sort of musical personality that thrived on cutting-edge innovation. You might even say he had more of a conservative approach among composers of his day. And yet looking backward over the tumultuous 20th century we can finally perhaps leave behind the polemics of avant versus rear, "progress" versus standing in place. Partially because nobody won the contest for the artist of the future. Not really. And if you listen today to the music of Kabalevsky there is no mistaking it for the music of the 19th century. He was of his time as much as anybody.

So we turn to the disk today, which features Kabalevsky's Cello Concertos 1 & 2 (CPO 777 668-2). The performances are very good. Torleif Thedeen takes on the solo cello role in a distinguished manner, neither overplaying or underplaying, giving the parts their lyrical and dramatic due with a beautiful tone. The NDR Radiophilharmonie Hanover sounds excellent under Eiji Oue.

The concertos are first-rate. The first has that dramatic minor Russian feel especially; the second some of that and a bit more expressivity. They are works that deserve to be heard, masterful and well wrought.

As a bonus we also get Kabalevsky's "Colas Breugnon Suite", which is perhaps his best known composition over the years in the States, or at least it has been for me since I found an old Columbia LP decades ago that featured the work on side two, backed by a well-loved Shostakovich symphony. It is captivating music, less ponderous perhaps but irresistible in the hands of NDR under Adrian Prabava.

The cello concertos are a joy to experience as well executed as they are on this disk. You are well served by this release if you want to know why Kabalevsky deserves your attention. This has excellence. It is music that stays with you after the last bar. Bravo!