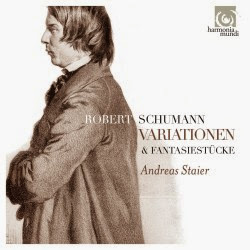 I think I've said this before, but today's album drives the point home ever more strongly. That is, that hearing romantic era piano music on a modern concert grand gives you an entirely different impression of the sonic balance than if you hear it on a period era piano. The modern piano emphasizes all ranges and registers with a more-or-less equal presence. The period piano has less intensity and sustain power, and more of a fragility to the sound. Each range has markedly different sound qualities across the board. (Different, that is, than how each range sounds on a modern piano.) Certain forte passages played on a modern piano are brazenly full, evenly balanced. The same played on a period piano gives more articulation between figure and ground, if played as they were originally intended by a fine pianist.

Andreas Staier is the right pianist for a project of this sort, very much so. His third volume of Robert Schumann piano, covering the Variationen & Fantasiestücke (Harmonia Mundi 902171), will make a believer of you. The music is not so well-known that we have been overexposed and settled in to the modern pianoforte bombast of a typical bravura reading. Yet there is much beautiful music to hear. I have never heard this music played in a way that doesn't eventually weary me, to tell the truth, though I do love Schumann and his piano ouevre very much.

But no, these Staier versions let you discover the delights of savoring the inner voices, which are considerably well-wrought, without them dominating and clouding over the thematic thrust of the pieces as Schumann conceived them. Of course it isn't all in the piano, it is also in the brilliance of how Andreas articulates and phrases each passage.

If you have ever found romantic piano music overly dense, a little too ever-present, Staier may well open your ears to what the music was meant to sound like. As much as Rachmaninov is dear to my heart, the music from the romantic era need not always have that slapdash van Cliburnian overexpression typical of late romantic Rachmaninov and typical mid-20th century performance practice. Earlier romanticism is not all supposed to sound like Rachmaninov, of course. And the power of the music can be as much or more in the subtlety of interpretation as in the amount of projective power.

And so I come away from this disk a happy camper. Schumann never sounded so personal, so little a projection of future hearing on an earlier period. It is of course a testament to Staier and his poetic artistry. . . and the right piano.