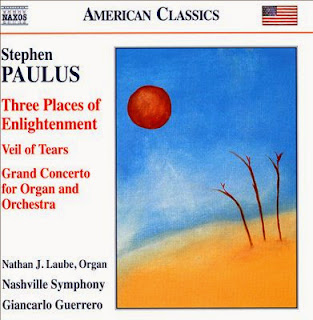 When you encounter recent composers in the modern tradition, but more towards post-neo-romantic than serialist form, are they pre-postmodernists? There is a point where labels get ridiculous and that would be an example. Stephen Paulus has a musical style that is no throwback, yet his syntax is expanded tonality in the idiom of the 20th century more so than the ritualist quasi-naivete of the postmodernist crew.

That comes through very nicely in a new disk of concertos and an orchestral work featuring impressive performances by the Nashville Symphony under Giancarlo Guerrero. Three Places of Enlightenment (Naxos 8.559740) carries the name of the subtitle for the "Concerto for String Quartet and Orchestra" that heads off the program.

Sadly Stephen Paulus passed away several weeks ago in the aftermath of a stroke, so that his vital life statistics are now 1949-2014. By default this ends up being his first posthumous recording. The loss seems great as I listen to the music on this program.

The music is prosaic, filled with eventful thematic richness and a sure sense of orchestral dynamics and color. The "Concerto for String Quartet and Orchestra (Three Places of Enlightenment)" (1995) is given its world premiere recording here. It has great drama and beautifully brio string writing for the quartet and the orchestral strings alike. The three movements have a very engaging forward momentum with virtuoso interplay within the quartet as well as with quartet and orchestra. Movement I "From Within" has a stirringly brisk pace that gallops across your speakers with diverse inventive passages that flow together with great rhythmic drive. Movement II "From Afar" has a chorale-like sadness expressed in the quartet and carried over to the orchestral strings, eventually expanding to the wider orchestra with expressive eloquence. It is touching, not sentimental as much as it is beautifully resigned. The final movement "From All Around and Radiating Ever Outward" returns to the briskly driving determination of the first movement. It is a work of genuine note, in every way a pleasing and extraordinarily well-turned showcase for the quartet with the orchestra taking an active involvement in the shaping of thematic development.

"Veil of Tears for String Orchestra" (2005) is quite brief, an excerpt from the holocaust oratorio "To Be Certain of the Dawn." It is a somewhat sadly bitter largo movement, poignant but over quickly.

The three-movement "Grand Concerto for Organ and Orchestra" (2004) (in a world premier recording as well) features Nathan J. Laube in the soloist's role. It begins gradually, then launches into music with the kinetic drive of the string quartet concerto but of course with the color and power of the full organ on display. The organ is in a triumphic mode and the amassed sound of organ and orchestra make for some truly grand spark flying, thickly at times but luminously, too. The second movement, dubbed "Austere; Foreboding" has a stark darkness in keeping with such concerns. It quietly haunts as it shows the quieter side of Paulus's virtuoso brilliance in scoring. The movement lets loose with outbursts that overwhelm with a hugeness of sound and contrast with the quiet anxiety of the movement as a whole. The final movement ("Jubilant") gives us a rousingly kinetic triumph that literally pulls out all the stops and amasses a well phrased immensity that makes for a moving conclusion.

I am very glad to have this disk of the orchestral-concerted Paulus, which will give your stereo a real workout while it envelopes you in some beautifully crafted, rather brilliant music. The Nashville Symphony sound fabulous under Guerrero. RIP Stephen Paulus. Don't miss this beautiful farewell!