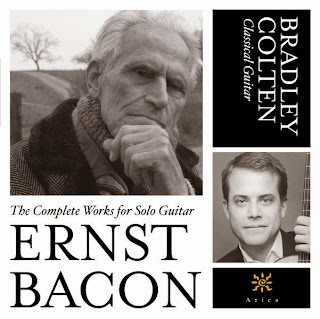 Though Ernst Bacon (1898-1990) composed fairly prolifically for the solo guitar and other instrumental configurations, he was mostly known in past years as an exponent of art song. Only one solo guitar work was published during his lifetime. Yet 19 pieces survive, laying in manuscript after being composed between the 1960s through the 1980s. He wrote them in the main for his son Joseph to play. They have a kind of intimacy to them that perhaps reflects the family setting.

In any event guitarist Bradley Colten gives us a recording of The Complete Works for Solo Guitar (Azica 71294). I've been listening and duly report in as always. Bacon was a contemporary of American pioneers like Copland and Harris, though he never quite received their recognition. The works presented here by Colten have sometimes a rustic charm befitting of Americana. Other works are more straightforwardly abstract, more or less neo-classicist (for example "The Three Canons").

Through it all there is a good feel for the multipart and sometimes contrapuntal capabilities of the classical guitar. The music is modern in its chromaticism and at times quite "folky."

Bradley Colten gives us well worked-out versions of the music and the sound is good. It's the sort of album that takes a bit of getting into but the rewards are there awaiting the patient listener. It is a refreshing bit of plain air music, neither pretentious nor unschooled. It suits many moods in its matter-of-fact expression.