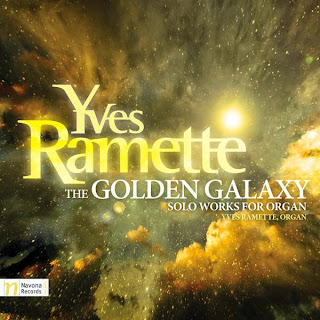 If you respond to the world of Messiaen organ music there is Yves Ramette (1921-2012), a French composer finally getting his due. He does in his own way what Messiaen did so well, to utilize the organ in modern chromatic, symphonic ways. The Golden Galaxy (Navona 5971) gives you a full CD and another EP CD (with enhancements) that cover his works quite nicely, as recorded by the composer between 1965 and 1993. The set contains works of real drama and impact.

There is virtuoso excitement generated by these works in Ramette's hands and you don't notice a difference in sound quality between the early and later recordings. What stands out is the extraordinary orchestral sonics of these works, their boldness, their vivid contrasts, their thematic singularity.

Ramette was a student of Honegger and went on to teach and compose over his long life. The music here has true originality. Based on the recording one would not hesitate to place him among the great organ composing exponents of last century. For those seeking holiday fare there is the adventurous "For A Christmas Night," but this set is one for all seasons.