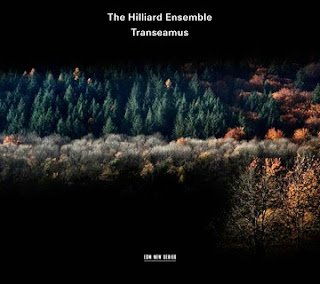 "There is no rose of such virtue..." so the old Christmas carol goes. But roses, in our contemporary world anyway, are destined, like us all, to cease to be some day. And sad to say, the same thing is true of musical congregations. Transeamus: English Carols and Motets (ECM New Series 2408481 1106) will be the last album of the Hilliard Ensemble on ECM. They are retiring. They have graced our ears with early vocal music for decades and done some wonderful work in the contemporary vein, too. They have been a superb exponent of vocal color and nuance, one of the guiding lights of early music performance practices today. So we have one last album, of 15th century two- and three-part polyphony for Christmastide and on other related sacred subjects. For us they have been a blossoming, a rose if you will, and the season of the full flowering is passing, at least as an ensemble.

We take solace in this beautiful album. Certain music has the power to bring back a past long-gone. To me that certainly is true of early music for Christmas (and for that matter, a great Jewish Cantor performing music of an earlier age). It connects us with a past that humanity lived through. We feel a commonality with them, for we live, too.

The program is a good one, with music both familiar and less so, "There is No Rose" along with "Clangat Tuba" both by an anonymous composer. There are others by unknown hands, plus those by John Plummer, Walter Lambe, William Cornysh and Sheryngham.

Throughout it all there is the Hilliard Ensemble, a small vocal group who realizes polyphonic vocal music with a sweetness and light that make them inimitable. They sound great as usual on Transeamus, which aptly translates as "we travel on". And so we do, all of us, headed from here to where we will.

A singular album this is, in the simple small ensemble format but with a richness of timbre and recorded sound that stays in your ears long after the music has ended. May it never end.