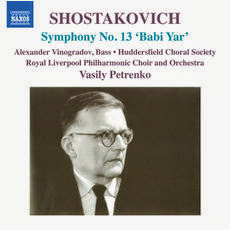 The later symphonies of Shostakovich occupy a turf of their own. Each has a personality. That seems especially true of his Symphony No. 13 "Babi Yar" which has just been released in a Vasily Petrenko version with the male voices of the Huddersfield Choral Society, plus the Royal Liverpool Philharmonic Choir and Orchestra with vocalist Alexander Vinogradov as principal soloist (Naxos 8.573218). It was completed in 1962. Shostakovich was to go on to live and compose up until 1975, so it is not in any way his farewell work--he wrote two more symphonies and other works in the last years.

And yet the 13th has a kind of finality to it, a dramatic quality that scales the heights of expressivity in some ways rather more so than previous works. It was written toward the end of Khrushchev's "thaw" and so perhaps there is a freedom of expression we are hearing. It also is based on a poetic text that severely takes Russia to task for its anti-Semitism, based on Yevtushenko's Babi Yar, which was published the year before. The influence of Mussorgsky can be heard; yet it is very much Shostakovich at his sardonic and almost brutal best.

It is a dark work, fitting to the subject matter, brooding on the depravity of pograms, the hardness of women's lot in WWII, suppression, the persecution of Galileo and the absurd policies of bureaucrats, each movement a setting of another Yevtushenko poem, each filled with reproach, the only redemption offered by a bittersweet, unforgettable motive in the flutes towards the end.

Bass vocalist Alexander Vinogradov gives us a gravitas performance of the best sort, amplified by the all-male amassed choirs. The Royal Liverpool Orchestra brings forth a vivid and rousing performance. Vasily Petrenko's interpretation is without flaw, impassioned.

There are many recordings of this symphony, some no longer available, but the Petrenko rivals them. With the Naxos price I recommend this version without hesitation. It is vital Shostakovich in a vital performance.