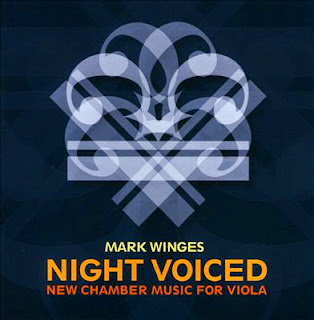 The viola has special charms that the violin does not. No, it doesn't have the piercing brilliance, not all of it, that we expect of the violin. What it does have is a dark richness, a woody quality that can lend itself well to introspection and dramatic expressiveness. Contemporary composer Mark Winges seems to recognize wonderfully the distinctive personality of the instrument in a full disk of chamber music featuring the viola, titled fittingly Night Voiced (Ravello 7880). Ellen Ruth Rose is the soloist in all but one of the four works represented and she comes through with great poise and feeling.

All the works are comparatively recent, written between 2004-2011. They vary in instrumentation. "Night Voiced" (2011) combines viola with organ, "Reciprocal Tapestries" (2004) with cello and piano, "Diverted Vignettes" (2012) is for solo viola, "San Francisco Stopover" (2006) joins viola, cello and guitar, and the reprised version of "Night Voiced" replaces the organ with the piano.

Throughout we hear a thoughtful composer set on exploring sound colors and a wider modernist tonality to show off the viola in moods that range from gravitas and intimate reflections (the solo Vignettes) to more extroverted stateliness and expansiveness.

Paul Hindemith was a viola player of excellence and wrote many works showing the viola as much more than a lower ranged cousin of the violin. Perhaps not surprisingly Mark Winges' music here shows an affinity with Hindemith's in its logically unwinding quasi-neo-classical regularity through much of the program ("San Francisco Stopover" being something of an exception in the all-over quality of its opening movements).

The music has genuine substance. Each work has structure and mood. Each stands on its own. Ms. Rose sounds quite right for this music, turning in performances that are compelling and expressive.

In all this is an excellent representation of Winges the dramatic and inventive exponent of modern chamber music.

Those who love the viola will be captivated. And those who don't will likely be pulled into the orbit of this program regardless. Very recommended.