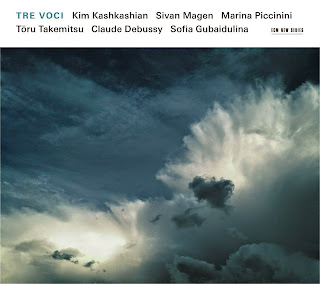 Premier violist Kim Kashkashian has gathered around her two very worthy partners in Sivan Magen on harp and Marina Piccinini on flute for a fine outfit they call Tre Voci. It is also the title of their debut album (ECM New Series 2345 4810880) which is simply self-titled.

For it they have chosen three works that go together quite well. The lyrical, pastoral mode so fitting for this trio instrumentation is realized nicely by choice and execution. The centerpiece is the well-known, well-appreciated Debussy "Sonata for Flute, Viola and Harp". It is surrounded by later, somewhat lesser-known works that have a slightly more modern bent but pay equal attention to the special sonance of the trio of instruments that make up Tre Voce: Toru Takemitsu's "And Then I knew 'twas Wind" and Sophia Gubaidulina's "Garten von Freuden und Traurigkeiten". The two later works have an affinity with the Debussy trio, the latter of which the composer wrote at the end of his life and managed to embody, as the lucid liner notes to the album point out, a kind of affinity with an Asian concept of time, of a simultaneous unfolding of sound within silence if you like.

It is surely one of Debussy's masterpieces, almost uncanny in its ethereal qualities. It points to the future in ways that both Takemitsu's and Gubaidulina's works further realize. The Takemitsu trio equals the lyric qualities, the Gubaidulina assigns specific roles to each instrument to produce lyrical but perhaps slightly more mysterious assemblages of sonic brilliance.

Tre Voci come through with ravishing renditions of all three works. I have never heard a more evocative Debussy. They give us a poignancy that the ECM audio production reinforces with singular appositeness. The other trios complete the mood with more of the gently spectacular introspection the pieces call for and are certainly given.

Tre Voci give us an almost indescribably beautiful triumvirate of performances on this recording. They set the bar high and program thoughtfully so that this seems like a definitive recording. It is gorgeous!