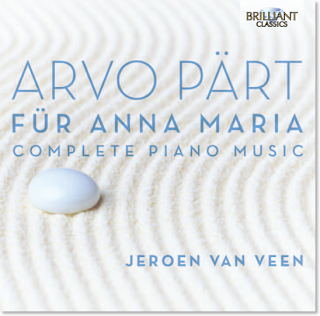 When someone has established a style of indubitable originality, it seems less critical to try and define the style category he or she works in. It involves a category of one. Still, one can see variously in the mature music of Arvo Pärt a looking backward at times, as a new music exponent of early music, a practitioner of "radical tonality," a minimalist, or perhaps at times a later follower of Erik Satie. The idea that you could fit him in a number of camps in part has to do with his originality. Beginning in the '70s he followed his own muse. Categories are applicable after the fact but do not explain away his music in any concrete sense.

So when we turn to a two-CD set just out, Jeroen van Veen playing Fur Anna Maria, Complete Piano Music (Brilliant 95053) we hear the composer as Arvo Pärt, not as a set of labels. The set covers his contemporary style period for the entire first disk and about half of the second. The second also gives you four earlier works from 1956-1959. The latter are brilliant in their own way, in a more conventional modern style that adds to our appreciation of the composer in his totality. They are pianistic and memorable.

But the later Pärt is what the bulk of this set covers. Jeroen van Veen (who we have covered earlier this autumn [September 17th] doing the music of Jacob TV) has the right personality for the music and delivers performances in every way worthy. Ralph van Raat did a disk of Pärt for Naxos some years ago (see October 20, 2011 posting) which has some overlap but then includes music for piano and orchestra. It is excellent as well. Both are different enough that one should probably have both.

Van Veen gives us two short and two long readings of "Fur Alina," which like some Satie works calls for repetition of a fairly short compositional sequence. We also get a bonus with the inclusion of "Fratres" and "Spiegel im Spiegel," which includes Douw Fonda's cello. Two pieces are for two pianos; Sandra van Veen joins Jeroen on these and sounds good.

The piano music universe of Pärt does not have much in the early-music influenced category. That's more what the vocal music covers. What his piano music is about in the mature period is singing diatonics, lyrical, reflective music that has some relation to Satie yet inimitably shows the very original melodic stamp of Arvo--deceptively simple yet unexpected in syntax so that it gives the listener much to ponder and never grows tiresome.

This is a central disk. Taken along with the van Raat Naxos it covers the pianistic totality of the composer and does so with all the sensitivity and deliberateness that is essential to bring his special world alive.