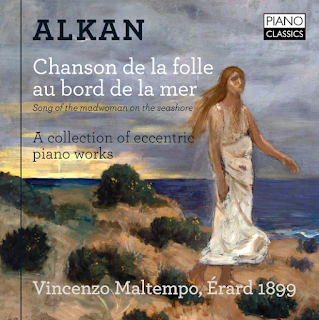 Charles Alkan (1813-1888) wrote music that was anything but typical of his times. Perhaps a parallel example was Mussorgsky in Russia (unless we want to talk about Sorobji, only he was later), but the music of the two are not really comparable, just their uniqueness. Alkan created a body of solo piano works that reflected the romanticism of his era at the same time as it took steps beyond it. For difficulty in execution they are often enough notorious, but what strikes one who spends time with his music is its eccentricity. Therefore Vincenzo Maltempo's fifth album of Alkan works is rightly subtitled A Collection of Eccentric Piano Works.

Chanson de la folle au bord de la mer (Piano Classics 0083) fits the description. These are some of Alkan's more unusual and iconoclastic works, eleven in all, played wonderfully well by Maltempo on an 1899 Erard grand piano. Maltempo makes the case that Alkan's works are after all meant to be played on a piano of his era, and listening to this volume, you can readily hear the subtle and sometimes dramatic differences. What is true of Mozart, of Beethoven, Brahms or Schumann is perhaps even more true of Alkan. It sounds different on a period piano, sometimes dramatically so.

That is, the period piano's sonarity is so different to the modern pianoforte that you hear the music in a new light. The forte is much more subdued in volume, each register has its own acoustic characteristics, and the upper notes do not tend to naturally ring out, just to note a few of the obvious characteristics of the earlier pianos.

So with these Alkan chestnuts, many if not most of which will be familiar to Alkan enthusiasts, you hear the voicings and the balance the way one presumes Alkan meant them to be heard. This is of course as much a product of Vincenzo Maltempo's artistry and genuine understanding of the music as it is the piano itself. It removes much of the slam-bang pianism in romantic interpretation of the ensuing 20th and 21st centuries for an appreciation of the nuance of voice.

The eleven mostly quite brief works sound breathtakingly well in the hands of Maltempo and his Erard, whether it is a matter of the "Tres Petites Fantaisies Op. 41" or the title work, "Song of the Madwomen on the Seashore," which is a part of the "25 Preludes Op. 31."

Maltempo's period performances are revelatory and triumphant. You hear Alkan in a new light. Recommended for those not much familiar with Alkan as well as his devotees. It is a delight, either way!