Marga Richter, Dew-drops on a Lotus Leaf and Other Songs 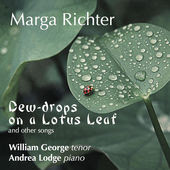 Marga Richter (b. 1926) graduated from the Julliard School, studied with Bergsma and Persichetti, received her MA in 1951 and came to some prominence with a number of compositions featured on the old MGM Classics label in the '50s, and then while remaining quite productive fell into some obscurity. However her music deserves our attention.

We get to hear some of her songs on the CD Dew-drops on a Lotus Leaf (Red Shift TK 435), featuring the tenor William George and pianist Andrea Lodge. "Dew Drops" consists of a 39-song cycle completed in 2002. On the compilation are five more works, "Sarah Do Not Mourn Me Dead" (1995), "Wild Moon" (2009), "Two Shakespeare Sonnets" (2007) and "Two Chinese Songs" (1952). This is a nice start on this part of her legacy, and apparently there are at least two more CDs worth.

Of the 160 compositions we only get a glimpse with what is currently available via recordings in print. I did cover her orchestral CD Poetic Images Beyond Poetry on this blog last March 5, 2013.

The songs often have a brooding quality, sometimes very expressively chromatic, key-centered, contemporary without being exactly avant garde. William George handles the songs quite well. They sometimes cover a very wide range (the cycle is for tenor or counter-tenor) but he manages to span it all rather incredibly.

The music has much to offer and bears close study. I am very glad to have the volume to hear repeatedly. Marga Richter is an American composer that needs to be re-evaluated, performed more often, appreciated. This compilation of her songs and the orchestral CD referred to above are a beginning. Listen to this one and hear for yourself. Recommended.