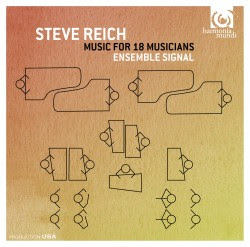 I think most serious students of musical minimalism when called upon to name only two works that best represented the first and central phase of the music would choose Terry Riley's In C and Steve Reich's Music for 18 Musicians. Those two, as attested by frequency of performances over the years and the recognized, inherently brilliant qualities of the music, best capture minimalism in its pulsating trance origins.

We have today a very beautiful new performance of Music for 18 Musicians (1974-76) by Ensemble Signal (Harmonia Mundi 907608). The first recording by Reich and his ensemble many years ago on ECM set the standard and there have been some good versions that followed, but Ensemble Signal shows you what can happen after a work has been thoroughly assimilated into the collective "mind" of the period. They may actually top the Reich version, which is saying much.

Ensemble Signal takes things at a nicely brisk pace, faster than the original and others that followed according to my naked ears. The music is the mature end-result of the years Reich spent studying traditional African music. His combination of genuinely moving rhythmic figures and melodically memorable material makes the work irresistibly compelling. The movement from section to section in a logical and very inventive framework gives the listener ever fresh possibilities while retaining momentum without pause. The ensemble writing for mallets, piano, winds, strings and wordless vocals is without peer. The work was a kind of beacon of the period. It set the stage for works that followed by both Reich and others that walked in his path.

Ensemble Signal handles it all adroitly. At first hearing I thought the mallets were slightly low in the balance, but in subsequent hearings that impression vanished and now I hear it as the well-blended composite that it is. They understand the balance between rhythmic thrust and melodic definition and give us a rendition that is superb, with the contours crisp and filled with the sort of elevated lyricism that Reich had in mind.

If you are a fanatic on this piece, as I am, you will welcome this version wholeheartedly. If for some reason you never heard the work, this is undoubtedly the one I would recommend you get, at least for starters. A seminal work of our time that all need to hear!