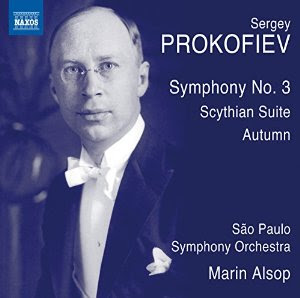 Sergey Prokofiev (1891-1953) wrote some of his brashest, most modern music in the later days of his first Russian period and in the days when he had residency in Paris. Of course this was before his second and final period in Russia when he was subjected to Stalin's iron-fisted "social realism" dictates and wrote music that was somewhat more restrained, though beautiful nonetheless.

Marin Alsop and the Sao Paulo Symphony Orchestra, in the midst of their notable Prokofiev symphony cycle, give us a measured reading of his Paris-era Symphony No. 3 (Naxos 8.573452). It was adapted from his opera The Fiery Angel of the mid-twenties, which never was staged then, and in fact was never performed in full until 1955. The opera itself is a daring work and the symphony takes on much of the thematic material for an equally daring symphony.

Included on the CD is a vivid performance of Prokofiev's "Scythian Suite" of 1914-15, taken from his ballet "Ala and Lolly," which was also never performed as such, being seen as not danceable. The Suite was a reworking of the music as it stood for concert performance.

A bonus of this set is the short symphonic sketch "Autumn," composed in 1910 and revised in 1915 and 1934. It shows us a more lyrically expressive side of Prokofiev (the liners mention the influence of Mussorgsky) in its first blush and nice to have in this performance.

The "Scythian Suite" and the "Third Symphony" are prime orchestral examples of Prokofiev the committed modernist, whose music had a bit more in common with Stravisky's "Rite of Spring" than perhaps later on, though the originality, the melodically striking, the motor impulse dynamism and the sure handling of orchestral forces put the composer solidly on his own turf.

I have heard more savage, emblazoned readings of both works, on LPs long out-of-print, mostly from orchestras in the former Soviet Union. But Alsop and the Sao Paulo Symphony Orchestra, true to form with the other performances in the complete symphonic cycle thus far, give us a very balanced and nuance reading of the pieces. They can be brash when called upon, yes, but also can handle the more subdued, lyrical passages with care and feeling. Really, of course, both sides are essential in understanding the Prokofiev of this period.

The Symphony and the Suite are masterpieces of this part of Prokofiev's oeuvre. If you don't know the music this is a very good place to start. If you are well-familiar with the works already these versions will give you another take on it all and so are worth having for that.

Beautifully bold Prokofiev, played with intelligence and passion! No need to hesitate, especially at the Naxos price.