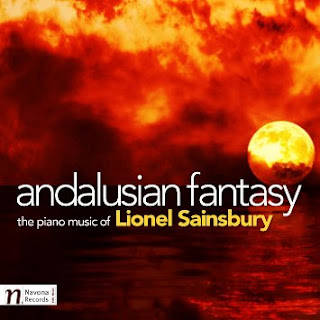 The musical traditions of Spain and Latin America are rich and vital. English composer Lionel Sainsbury (b. 1958) has long been taken with it all. On his Andalusian Fantasy (Navona 5999) we get to hear how his fascination and love for the music becomes a creative force in his own music, in this case a series of works for solo piano.

Is he the Boccherini of today? To the extent that he immerses himself in the music and gives back creatively in kind, perhaps yes. Otherwise, such comparisons are not all that illuminating, for Sainsbury has the modern present in him as well as the Latin-Spanish influences, so you hear some of the presence of jazz precedents (Gershwin and Ellington, perhaps) and a post-impressionist glow as well.

The Spanish-Latin rhythms of dance and the melodic-harmonic particularities are readily heard in the works presented in this collection. All are well performed by the composer himself with a flair and liveliness in keeping with his dynamic style. There are moments of relative repose and introspection to be heard as well. And the jazz-oriented element can be heard directly or indirectly depending on the work or movement. It is not always the jazz of today or tomorrow so much as a recapturing of jazz-oriented compositional ways of pre-mid-20th century masters. But even then it is not a direct imitation as much as a personal rechanneling.

In all we hear six very worthwhile pieces: The "Andalusian Fantasy," the "Nocturne Op. 18," the "South American Suite," "Twelve Preludes Op. 11," "Esquisse," and the "Cuban Fantasy."

Through it all the music personality of Sainsbury shines forth. He is not merely showing how the Spanish and Latin traditions have entered his musical thought, he transforms those elements into a music that has originality and a modern-classical thrust that remains his, while channeling some of the pianistic traditions of such adaptations from the French and Spanish impressionists and post-impressionists. In the end you have a very personal and very delightful set of works that show us an inventively vivid side of Lionel Sainsbury. Recommended!