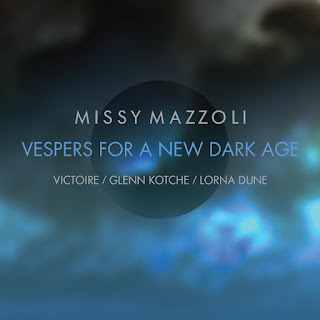 The new in new music is ever blossoming. It never stops. Today, a somewhat sterling example of all this, with Missy Mazzoli and her Vespers for a New Dark Age (New Amsterdam). It is a chamber ensemble work in a post-minimalist zone, with texts based on the poetry of Matthew Zapruder. The texts are a cry to a God who does not seem to respond, set in the midst of a world that does not fulfill the desires of the poet. Hence a Dark Age, literally an age of darkness. The "vespers" are therefore not of course in the sacred tradition yet there is something ritualistic about it all nonetheless.

The music is scored for a modest sized chamber group, ensemble Victoire for the recording, which includes two keyboard-electronics players (one Missy herself), violin, clarinet, double bass, guest artist Glenn Kotche on percussion and three singers, Martha Cluver and Mellissa Hughes, sopranos, and Virginia Warnken Kelsey, alto. The vocal performances are quite beautiful, in keeping with the haunting quality of the lyrics and Ms. Mazzoli's approach to them. The music is fascinating, post-minimal with something of an early music element combined with a present-day zeitgeist. The vocal ensemble sometimes sounds quite reminiscent of Steve Reich's vocal treatment in "Tehillim" but expanded upon in its own way. There is a general tonal ambiance that when added to a rock-oriented drum set (not continuous) puts it in a very contemporary zone somewhat removed from high modernism per se and more post- in orientation.

The music has plenty of melodic-harmonic content, which by generally staying away from minimalist repetition while showing plenty of invention gives it originality and memorability. The keyboard-electronics bring to the music on occasion a fullness that belies the mid-sized chamber sound, in the way that the addition of an organ in earlier music does. The eight movements are varied in moods, reflecting the texts but having in common a feeling of loneliness that comes out of alienation, I suppose you could say. It is music to ponder upon, well-conceived and performed with spirit.

As a bonus there is a remix by keyboard-electronician "Lorna Dune" Krier of Mazzolli's "A Thousand Tongues." Deidre Muro is the special guest on voice and Victoire once again were involved in the initial music tracking. I've never heard the original mix of this work so I cannot comment on the remix. The keyboard element is central, with washes of harmonic motion colored by solo instruments. The vocal part is haunting in how it comes through to the listener as from another world. It is most intriguing and moving, certainly.

So that's my take on the music. Missy Mazzoli has an excellent sense of sonic color and a fluid lyrical darkness, one might say, infused with a tenderness and humanity coping with what seems like a cold world.

I do think you should hear this, you who wants to keep current with the very latest musical unfoldings. Missy Mazzoli shows her very own musical sensibilities yet has deep roots in the recent past of the present. Listen.