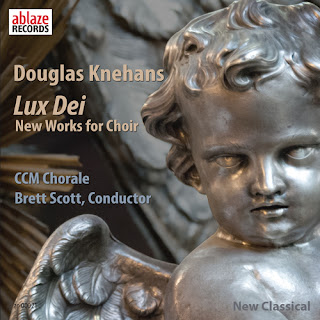 The repertoire for sacred music for choir has such an all-pervasive history about it that new works often reflect the past-in-the-present to a higher degree than in some other genres. That is true in a rewarding way on the release of new works for choir by composer Douglas Knehans, Lux Dei (ablaze ar-00021).

It is not that the music does not sound contemporary-modern. It does. But there is an element of tradition that pervades the music as well.

The CCM Chorale under the direction of Brett Scott, with Christina Haan accompanying on the organ for one work, sound very good and give the music its full due.

There are six works on the program, covering nearly 25 years. All but one are sung in Latin, which is part of the traditional element. There is less counterpoint than you would hear in early music and the harmonies are modernly tanged.

In all we get Knehans' "Panis Angelicus," "Three Psalms," "Epicideum Hathumode," "Two Looks at Silence," "Missa Brevis" and "Symbolum Apostolorum."

All bring out the S-A-T-B timbral beauty inherent in a first-rate choral ensemble. Knehans gives us much to appreciate and contemplate. He is a composer with a very apparent affinity to the choral mode and at the same time shows us a mastery of his craft and an inspired result.

The music is not so much post-modernist in any self-conscious way. It is neo-contemporary if you will, extending the choral tradition to the present without resorting to stylistic contrasts. The music is whole and not easily pegged to a particular camp. That most certainly helps us appreciate Knehans on his own terms.