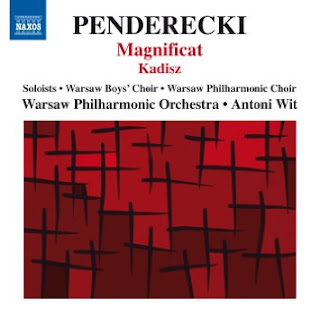 Krzysztof Penderecki electrified the high-modernist new music world in the '60s with his highly dynamic orchestral and choral music. He created works often based upon historical or religious subject matter which helped concretize the meaning behind the turbulent sound worlds, in works such as "Utrenja" (The Entombment of Christ) and "Threnody for the Victims of Hiroshima."

Then in the later '70s his music made an abrupt turn into tonality and neo-romanticism and to my knowledge never turned back. I have spent less time with his later works. I am not so familiar with the whole of them so I have no informed opinion, other than to note that there is no falling off in craftsmanship and inspiration in what I have managed to hear.

There is a new CD of two contrasting choral-orchestral works from the earlier and later periods by soloists, massed choirs and the Warsaw Philharmonic Orchestra, all under Antoni Witt. It juxtaposes the earlier with the later in Magnificat and Kadisz (Naxos 8.572697), the former from 1973-74, the latter from 2009.

"Magnificat" has avant elements in place but mostly with a slightly less dense demeanor than some of the earlier choral works. There also is reference to historic church music styles that you hear from time to time. It is a long ambitious work for bass soloist (Wojtek Gierlach), a seven-member male vocal ensemble, the Warsaw Boys' Choir, the Warsaw Philharmonic Choir and the Warsaw Philharmonic.

I don't recall hearing this work in earlier versions so I cannot comment on how this performance stacks up. It is a difficult work that Maestro Wit and company manage to bring to us in vivid fashion. The complexities are such that you must listen carefully and more than once to absorb. It may not have quite the visceral-aural kick of Penderecki's "Passion" or "Utrenja" but it is dynamic and engrossing nonetheless.

The 2009 "Kadisz" has a dramatic continuity with the "Magnificat," only less in the expanded tonality and sound color realm. It was written to commemorate the 65th anniversary of the horrific liquidation of the Jewish ghetto in Lodz. Understandably it is very somber and dark. Soprano Olga Pasichnyk as soloist is quite effective, as is Alberto Mizrahi in the tenor role. The Warsaw Philharmonic Male Choir and the Warsaw Philharmonic create a moving tapestry of lament and protest fitting to the dark history of genocide that the music laments.

This is Penderecki in very good form, performed with sympathy and insight. I cannot say that "Magnificat" would be my first choice for a representative work of his first period, but the music is quite worthwhile and stands on its own. "Kadisz" seems a quite fitting example of his later work.

The music is well done in any event. It is a worthy addition to understanding Penderecki and his oeuvre. I am glad I can listen more to this one in the future. It is not music to grasp easily or take lightly. And that in itself is saying a good deal. Hear this one and ponder.