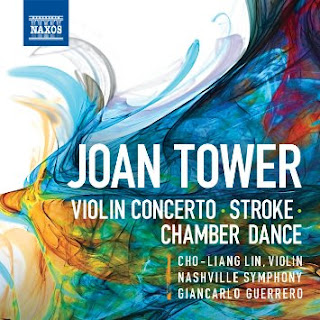 American composer Joan Tower (b. 1938) has rapidly become one of the prevailing composers of our era. A childhood partly spent in South America added some musical roots not typical of someone born in the US. She received an MA and PhD from Columbia in the classic years and gained much experience in the chamber music worlds while she evolved from a 12-tone to an eclectic modernist as composer.

Her music is generally vibrant and memorable. The new recording of three recent compositions (written between 1991 and 2010) bears this out nicely. Violin Concerto, Stroke, Chamber Dance (Naxos 8.559775) centers on the Nashville Symphony under Giancarlo Guerrero with Cho-Liang Lin as violin soloist on the Concerto. Two of the three works are in first recordings and all sound well with the artists at hand.

"Stroke" (2010) is the more overtly expressive of the three, written when Joan's brother George suffered through the affliction. It is a sometimes violently turbulent, always exciting piece that brings emotion and thematic modernism together in a potent mix.

The "Violin Concerto" (1991) has a more intricate, labyrinthian way about it. The violin part twists and turns around a briskly moving orchestral matrix tumbling over a knotted virtuoso horizon. It is masterful and unrelenting in its fertile invention.

"Chamber Dance" (2006) continues the motion-oriented mood with tutti or near-tutti passages of strength and mercurial temperament alternating with solo instrumental interludes for an impressive result.

Joan Tower manages to stay within a general modernist camp but uses tonality as well for some very dynamic music that will appeal to the new music fan while remaining pretty accessible for the more general classical listener. These are strong works, performed with enthusiasm and precision by Guerrero and the Nashville Symphony.

This forms a nice introduction to Tower's later music but holds its own for anyone who already appreciates her. Very recommended.