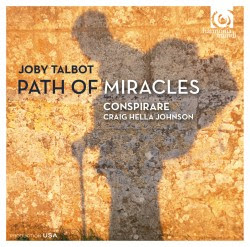 Acclaimed choral ensemble Conspirare under the direction of Craig Hella Johnson brings us music in a contemporary post-modern realm with the music of English composer Joby Talbot and his epic Path of Miracles (Harmonia Mundi). It depicts a pilgrimage along the Camino de Compostela in Spain.

What is most intriguing about the music is how it combines early music choral styles with modernism and tonal post-minimalism.

The performance is inspired, the music neither entirely typical of other composers who utilize early music aspects (such as Part) nor the minimalist-and-beyond enclave of contemporary composers. It combines various aspects in its very own way, remaining very much in the sacred music realm without following the typical path.

It is beautiful, stirring and unexpected. Conspirare give the music their own impeccably angelic way, something for which they are justly celebrated. Very recommended.