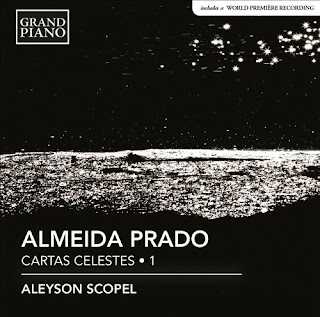 Music is a container of meaningful sound. Modern solo piano music is a series of such containers, often filled with complex gestures, sonorities, timbres, tone syntax that in the best of circumstances speak to you in a language you understand but have not been privy to previously in quite this way.

That is very true of Almeida Prado (1943-2010) and his "Cartas Celestes" series of piano pieces. Aleyson Scopel has embarked on a recording of the complete cycle, with the Complete Cartas Celestes 1 (Grand Piano GP709) currently out as the inaugural volume. For this first offering we get Nos. 1, 2, 3 and the World Premiere recording of No. 15.

It is a virtual musical mapping of the heavens and so understandably has a hugely open and expansive modernist feel to it all. Prado studied initially in Brazil with Guarnieri but then with Boulanger and Messiaen in Paris. The music has the rhythmic complexities of Messiaen, jaggedly asymmetrical, but also perhaps even more abstracted than typical of Messiaen, and less tied perhaps to melodic continuity at times. But then you might get a canonic contrapuntal passage that appears and gives us a brief glance backwards before venturing forth again into the remote stratospheres of relational sounds. All of the music exemplifies Prado's "transtonal" approach, which is neither quite tonal, atonal or bitonal but all at once, I suppose you could say.

It is music of high modernist adventure, played impeccably and expressively by Aleyson Scopel. Volume one comes through with but four of what appears to be a monumental piano opus, ambitious and dramatic, singular and vividly gestural.

I am much taken with the music and its performance. Any of you high modernist devotees out there will undoubtedly respond to this music, and may find yourself wanting to hear it all. Prado comes across as a major figure in the music, surely. Highly recommended.

Posted by Grego Applegate Edwards at 4:52 AM