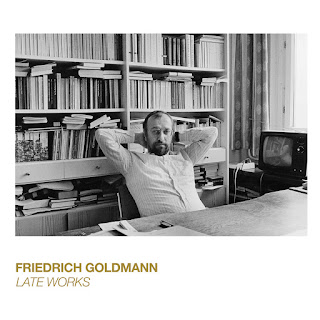 A dedicated enthusiast tends to hear music a work or a discreet group of works at a time (except perhaps with HPSCHD or some other of Cage's combined works). And so it goes throughout life. Each day or week brings yet more music. Sometimes what's new is a continuation of what you already know; other times it is a significant rupture in the fabric of continuity. Being happily provided the chance to hear the music of Friedrich Goldmann (1941-2009) in the last month or so has been something of a rupture or breakthrough for me. Here is an important high-modernist exponent, a pupil of Stockhausen, a force for the new and in spite of all my musical explorations I have missed him. But not now. I was happy to speak of an exciting release of his music a few weeks ago (see the chronological table via the blog contents column on the right).

And today I am back with another excellent anthology CD, Late Works (Macro M24). It covers a spectrum of offerings from an intimate duo to an orchestral piece, altogether giving us a nicely synoptic picture of Goldmann's later style.

So in that we hear a composer who has worked his way through his own take on Darmstadt and like other similar brilliances of that school has used compositional method as a Wittgensteinian ladder to advance into works with a pointed sense of ultramodern sound color and post-harmonic pan-and-post-tonal all-inclusiveness that gains from the grasp of structure one absorbs from working in serialist modes. If all goes well it allows the creative and intuitive composer to extend the high-modern legacy into the creative present.  We surely can hear that on this album.

For all that we experience a composer who has gained a surety of means and a sensitivity to instrumental possibilities that is remarkable, that holds his own with the most well-known high modernists in their later phases.

The four works heard here each has a great deal to offer, one in studio recording, the rest live in concert, all played inspiringly well.

"Haiku a 6" opens the program. The Modern Art Sextet gives us an expressive reading of the work, which is filled with finely etched musical detail, brilliant use of sonarities and mysterious juxtapositions of sustained and shifting tone clusters.

Its sound base is logically extended in the larger chamber group piece "Ensemblekonzert 3," played by musikFabrik with care under the direction of Enno Poppe. It is a fantasia based on the fundamental notes of  an arioso from Bach's St. Matthew Passion. The delicately orchestrated gossamer-like transparency of the music shows Goldmann's brilliantly lively and unparalleled way with the waves of contrastively startling instrumental groupings.

The violin-cello duet "Sisyphos zu zweit" gives us a freshening of contrast, a dramatic motor-sensory interjection before we launch into the landmark orchestral opus "Wege Gewirr Ausblick." Ekkehard Klemm and the Orchestra of Hochschule fur Music "Carl Maria von Weber" Dresden are fully rehearsed and marvelously attuned to the ever-shifting fantasmagoria of brightly conceived color textures. It is a fitting conclusion to the program, a tour de force of invention and orchestration.

And so we get the chance to hear some of Goldmann's later gems, beautifully performed, brilliantly revealing a high-modern original at his peak powers.

Anyone interested in the modern period should hear this. It is essential, a real discovery for those who do not know Goldmann's music well, and no doubt a confirmation for those that do.