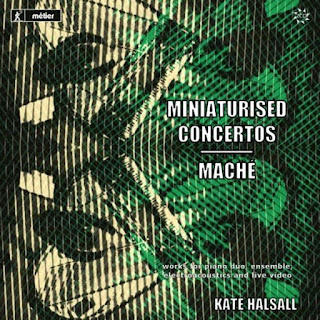 The "What's new?" factor is foremost on the recent 2-CD set Miniaturised Concertos, Mache (Metier msv 77205), which features works for two pianos, chamber ensemble and electroacoustics. The musical director is Kate Halsall and she has done a fine job coming up with exciting new music and guiding the live performances to a satisfying fruition.

The Miniaturized Concertos disk spotlights the twin piano/keys of  Kate herself and Fumiko Miyachi performing works by Andrew Poppy (with chamber ensemble) Naomi Pinnock (with percussion), Philip Cashian (with chamber ensemble), and Colin Riley (with electronics and sound design). This is new-minimalism and post-minimalism in a most original and healthy steady-state.

The musical soundscapes-panoramas give us a sort of state-of-the-art window on ultra-post-modern-modern worlds. It makes for a beautiful listen.

This set breaks ground and stimulates the musical ears in rather profound ways. I do not hesitate to recommend it highly. An essential offering for what, indeed, is new out there right now.
Posted by Grego Applegate Edwards at 5:44 AM