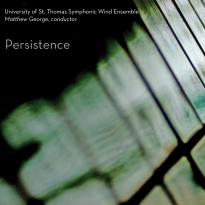 The Wind Band or Symphonic Wind Ensemble of course has over the years developed its own repertoire. There are some wonderful pieces out there. The Eastman School of music gave us some classics in recorded form in the later '50s, but there have not been quite as many albums as one might have wished following that period. As if to make up for the comparative lack, the University of St. Thomas Symphonic Wind Ensemble under Matthew George gives us a substantial 3-CD set of contemporary works on Persistence (Innova 812:3-CD). They are a high-spirited and quite competent outfit and George has made a point of following an ambitious program of premieres by contemporary composers, ten works in all in respectable to very good performances.

Suffice to say that this is in the tonal modern camp, that there is a great deal of latitude in the stylistic approaches represented, and that there is much to intrigue.

These are well-crafted, truly symphonic additions to the repertoire. There is much to appreciate for the wind band enthusiast and at the same time the set gives us a survey, an encapsulation of new music possibilities in the middle tonal realm. It is well done and consistently engaging. Thank you Matthew George!
Posted by Grego Applegate Edwards at 5:05 AM