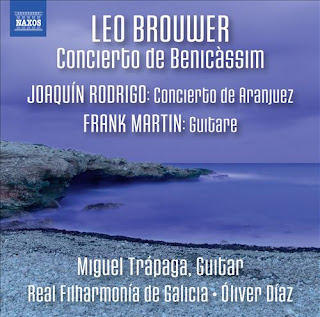 The concerto for classical guitar and orchestra became more widespread in the 20th century, with classic works that established the genre as a specially expressive vehicle in its own right. Today we hear guitar soloist Miguel Trapaga with the Real Filharmonia de Galicia under Oliver Diaz in a memorable program of three modern pieces, two concertos and an orchestrated version of a guitar suite, centered around the World Premiere recording of Leo Brouwer's 2002 opus Concierto de Benicassim (Naxos 8.573542).

The Brouwer concerto is everything one might hope for--sometimes folk-like, expressive, progressive, modern in its core yet tonally lyrical, excellently orchestrated and sporting a touchingly memorable and virtuoso solo part. It is performed with the dreamily atmospheric potential and dynamic drama of the music out front. The Lento second movement stands out in balladic expressive fashion, mysterious and panoramic; the outer movements are bracing and filled with twists and turns that remind us just how accomplished and original Brouwer has become over the years.

Swiss composer Frank Martin (1890-1974) is a somewhat neglected composer today. He deserves greater exposure as a stylist who followed his own muse regardless of the passing fashions of his lifetime. His "Guitare" from 1934 enjoys its World Premiere performance here, incredibly. It is the orchestrated version of his "Quatre pieces brevis" for solo guitar. It is dynamically neo-classically modern sounding, replete with a Spanish tinge at times, inventive and substantial. Along with the Brouwer it is especially fine to now have the work to hear in recorded form, as it glows in its own way with a freshness that seems as current as ever.

Buoyantly luminescent, lightheartedly joyous in the outer movements, plaintively tender in the inner, Rodrigo's seminal "Concierto de Araquez" (1934) gets it due to put a capstone on the program. There may perhaps be more spectacular versions out there but Trapaga and the Real Filharmonia de Galacia with Diaz at the helm give us a stirring version here that leaves nothing to be desired.

The disk leaps forth into our listening space with very well burnished, dedicatedly authentic performances of the three works. The Brouwer is a revelation, the Martin a nice surprise and the Rodrigo a heartening confirmation that Miguel Trapaga, Oliver Diaz and the Real Filharmonia de Galicia thrive with alternating bravura and introspection as the scores demand. In the process they draw us into each work with a care and dedication that is a pleasure to experience.

The Brouwer work alone is worth the modest Naxos price. The Martin enriches us further. And the Rodrigo gets the sort of poetic reading that is hard to resist. Bravo!