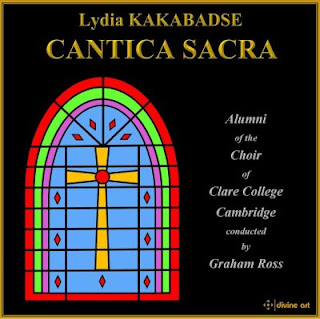 Contemporary modern composer Lydia Kakabadse brings to us a vision of sacred music that incorporates archaic influences from chant and early polyphony in four sacred works for choir and soloists (plus chamber instruments for the initial work). Canta Sacra (Divine Art dda 25135) is performed with authentic flair by the Alumni of the Choir of Clare College Cambridge conducted by Graham Ross.

Anyone who appreciates the early music "old-in-the-new" approach of Arvo Part and others who follow in his wake will find these four works quite different yet genetically related and compelling in their own way. The opening work "Spectre of the Maiden Scorned" uses the Requiem Mass as the basis for a story of a monk, the woman he loves and those who attempt to prevent their elopement. It is haunting and highly memorable.

The three other items on the program utilize a choir of unaccompanied male voices for a series of new works that take on chant, organum and post-organum styles in nicely wrought recreations. The Liturgical Cycle "Cantica Sacred," the Lenten Hymns "Kontakia" and the Marian Hymns "Theotokia" give us a genuinely inspired vision of early sacred music with a movingly original modern flair that takes you back many centuries yet de facto and in its encompassing totality belongs to our contemporary present.

Lydia Kakabadse is a phenomena and a virtual reincarnation of an early music master. Her music is impressively singular. Graham Ross, the Alumni Choir and all the rest give us wonderfully mysterious and detailed performances that one does not forget after several hearings.

Anyone who revels in early sacred music will find this program surprising and very worthwhile.

Heartily recommended.
Posted by Grego Applegate Edwards at 4:43 AM