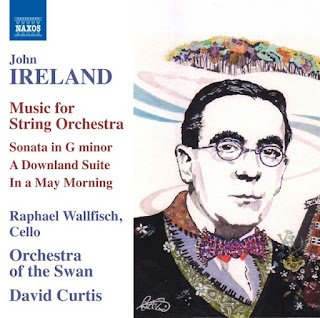 John Ireland (1879-1962) is not exactly a household name, and perhaps more's the pity? He doesn't seem fated to enter the pantheon of immortals,  yet as a leading English impressionist he gave us some substantial fare. His Music for String Orchestra (Naxos 8.571372) is a case in point, though I have not heard any of it until now and this welcome release.

His music in the eight pieces represented makes a case not for Ireland as the English Debussy or Ravel, but a composer in the impressionist-rhapsodic lineage of the Vaughan Williams of "A Lark Ascending" or Frederick Delius. The music presented here was originally written for solo piano, cello and piano, violin and piano and brass band. With the exception of the two middle movements of "A Downland Suite" all of these works were orchestrated by others, yet the lyrical effusiveness of the original music comes through readily and consistently.

The performances are respectable, as is the recording quality. Raphael Wallfisch sounds well on the solo cello parts.

I could imagine Boult or the like doing a state-of-the-art version of these works but since all but one short piece enjoy their world premiere recordings here in orchestral form, this is our sole option. Most certainly we get a vivid sound picture of the music in these David Curtis versions.

Modern period Anglophiles will find this album a good addition. The music will appeal to those who appreciate an impressionist coloration. They do not have the power to topple the existing hierarchy of "masterworks," but then what does? A most pleasant listen.
Posted by Grego Applegate Edwards at 5:03 AM