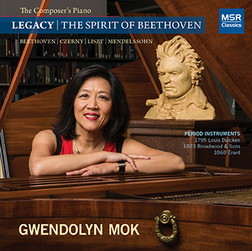 Beethoven's influence ended up being as huge as anyone's in the history of classical music. His approach to the pianoforte influenced virtually all who followed, and not just in the music itself, but in the development of a singing tone. Gwendolyn Mok makes use of three beautiful sounding period pianos (a 1795 Louis Dulcken, an 1823 Broadwood and Sons, and an 1868 Erard) to address the Beethoven influence, first Beethoven himself, then his pupil Carl Czerny, a Franz Liszt transcription and a characteristic Felix Mendelssohn work.

The program starts with Beethoven's breakthrough "Pianoforte Sonata No. 2 in A Major, Op. 2, No. 2" of 1795. It all starts here and it all follows through from the initial impetus. Carl Czerny in turn taught Franz Liszt and instilled in him an adoration of Beethoven's piano legacy. Felix Mendelssohn knew both Czerny and Liszt and like them was under the spell of Beethoven from the beginning.

We get that connection both directly and indirectly through a number of well-chosen works: Czerny's "Erste fantasie auf motive aus Beethovens werken" (1835), where Czerny utilizes themes from eight Beethoven opuses and weaves a fantasy around them. His 1841 "Nocturne in E-Flat Major, Op. 647" shows the mature composer and what the singing legato style meant to him.

A volume of tributes to the master, Album-Beethoven, included 11 composers and was published in 1841. Czerny's "Nocturne" was among the highlights, as was Mendelssohn's "Variations Serieuses in D minor, Op. 54." It is a fitting conclusion to a program that literally glows with Beethoven's presence.

The period pianos and Gwendolyn Mok's subtle reading of them give us a Beethoven and an early romantic way that remains connected to its classical roots, shows a beautifully singing style without the excessive rubato or emotional blindsiding that 20th century performances sometimes strayed into.

All the works meld together as an impressive, privileged ear-side view of what indeed the early period of Beethoven's legacy sounded like. Hearing the original pianos reminds us that this music was neither commandingly loud at its extreme end, nor are the voicings balanced in the typical ways that the modern pianoforte encourages and even requires. There is a blend of registers but a distinct heterodox multivoiced timbral quality, too. You hear a different kind of balance as you listen to Ms. Mok and the piano responses. It is like hearing the music anew.

It is a joy of an album, a triumph for Gwendolyn Mok and the repertoire as well. Beethoven no doubt would have loved this disk! Highly recommended.


Posted by Grego Applegate Edwards at 5:27 AM