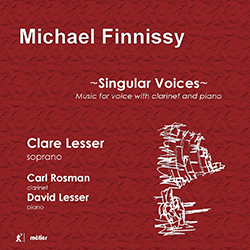 From the extensive series of Michael Finnissy offerings on Metier comes a recent release of vocal music, Singular Voices (Metier msv 28557). It is a grouping of high modernist song that incorporates folk-like elements in its attention to song form--which may take a few listens to grasp but is present in subtle ways. It features the remarkable virtuoso soprano performances of Clare Lesser. It is understandably for Finnissy very much in the grand tradition of modern song in the post-Webernian mode, but originally his own nonetheless.

Ms. Lesser holds forth unaccompanied, with piano and/or with clarinet, with David Lesser on the former and Carl Rosman on the latter. This is difficult music from a performance standpoint and all three do an excellent job realizing the complexities.

It is demanding music on all fronts. Those who are familiar with the jagged rhythmic soundstaging, the expanded and post-tonal rootedness and widely spaced intervallic acrobatics of much of high modern song will readily take to the myriad complexities of these works. Others may find it necessary to adjust the expectations and zero in on the sensuous properties of the music.

It is a testament to the highly musical sophistication of Ms. Lesser and her colleagues that all comes off exceedingly well. It is a showcase for Michael Finnissy's singular vision of the ultra-modern possibilities he realizes with such artistry.

Confirmed modernists will rejoice! Sound adventurers will find this a very worthy challenge. It has helped me become a Finnissy adherent. Beautiful music if you adjust to its very expressive world!
Posted by Grego Applegate Edwards at 5:53 AM